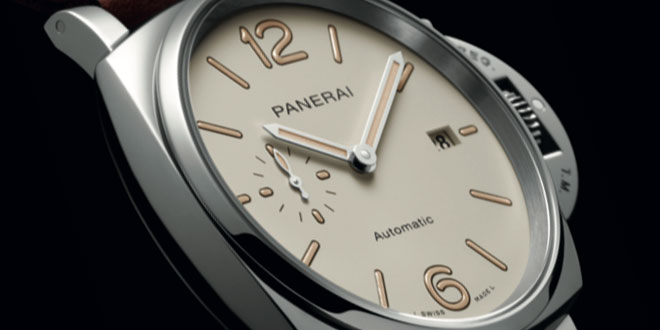 Hot off the presses, Panerai has released a slew of new Luminor Due timepieces. Okay it’s only 6 of them but that’s a pretty substantial number no matter how you look at it. These 3 pieces range from 38mm to 45mm and all feature automatic movements.

In 2016, Panerai introduced the new Luminor Due line which offered the classic look of the Panerai Luminor but in a very slimmed down version. They were initially met with a lot of mixed reviews on my instagram channel. There was a great divide between the purists saying this is not Panerai DNA, while a lot of newer collectors and fans of the brand loved the move and were clamoring for a slimmer watch they could wear for years. While it’s true that Panerai is known for its presence, not everyone can pull that look off as easily so these were the perfect addition for that group.

Panerai took it even farther when they introduced 38mm versions of the Due back in early 2018. Call me crazy, but if you talked to a majority of people who saw them at SIHH said they were some of the winners of the show. So without further adieu let us take a look at these new six pieces in detail.

Essentially there are 3 new looks for these Due, with 2 of them having both a 38mm and 42mm version while one of them has a precious metal case as well. I want to start off the conversation with the style that stands out the most becuase it’s a combination that has not yet been done by Panerai in any of their recent releases.

The Panerai PAM1043, PAM1045, & PAM1046 all feature a pleasantly appealing white dial and beige lume. The dial is painted with this complimentary beige dial lume as opposed to a sandwich dial and have a date indicator at the 3 o’clock position and a sub second sub dial at the 9 o’clock position. 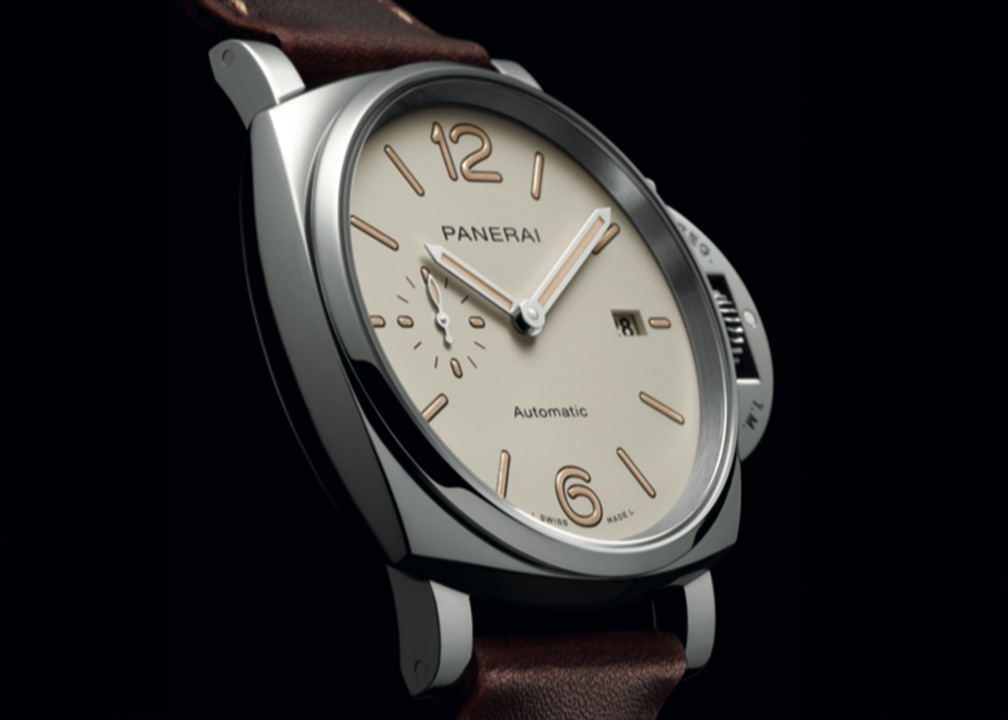 The white dial collection features a 38mm Stainless Steel (PAM1043) and 42mm (PAM1046) version of the watch. Both of these versions are powered by the P.900 Calibre which features a 3 day power reserve, 12 1/2 lignes, thickness 4.2 mm, 171 components, 23 jewels, 28,800 vibrations/hour, Incabloc® anti-shock device, and single spring barrel executed entirely by Panerai. The 38mm comes on a taupe brown strap with beige stitching and also has the new quick strap change system that allows you to change the look fairly easily. The 42mm PAM1046 features one of my favorite style of straps, the “Ponte Vecchio” calf leather which is dark brown and ages very nicely over time.

The final member of the white dial family is the PAM1045 which is done in a Goldech case which is their red color gold alloy created by Panerai.

The gold used by Panerai is a special alloy, different from standard gold. Panerai goldtech has a percentage of copper giving the material an intense red hue that is particularly elegant and sophisticated. Platinum is another fundamental element of the Panerai gold alloy, as it helps to prevent the metal from oxidising.

This 38mm version is definitely stands out a lot more with the gold and white dial combo as compared to the steel versions. As with the other models it is powered by the in-house P.900 movement and has a depth rating of 3 bar or approximately 30 Meters. While we won’t see you diving to the depth of the sea with these particular Panerai piece, you won’t have to worry about any water. 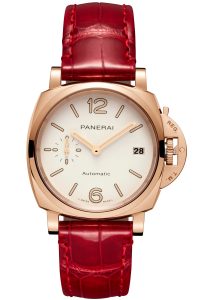 The next two in the new pieces are the PAM926 & PAM927 which are 38mm and 42mm Blue dial Luminor Dues. These models both come in a brushed titanium case making them even lighter than their steel counterparts. These watches being as thin as they are and on the smaller side of the Panerai lineup already don’t weigh too much, so it must feel like you aren’t even wearing anything when it comes to these new titanium versions. 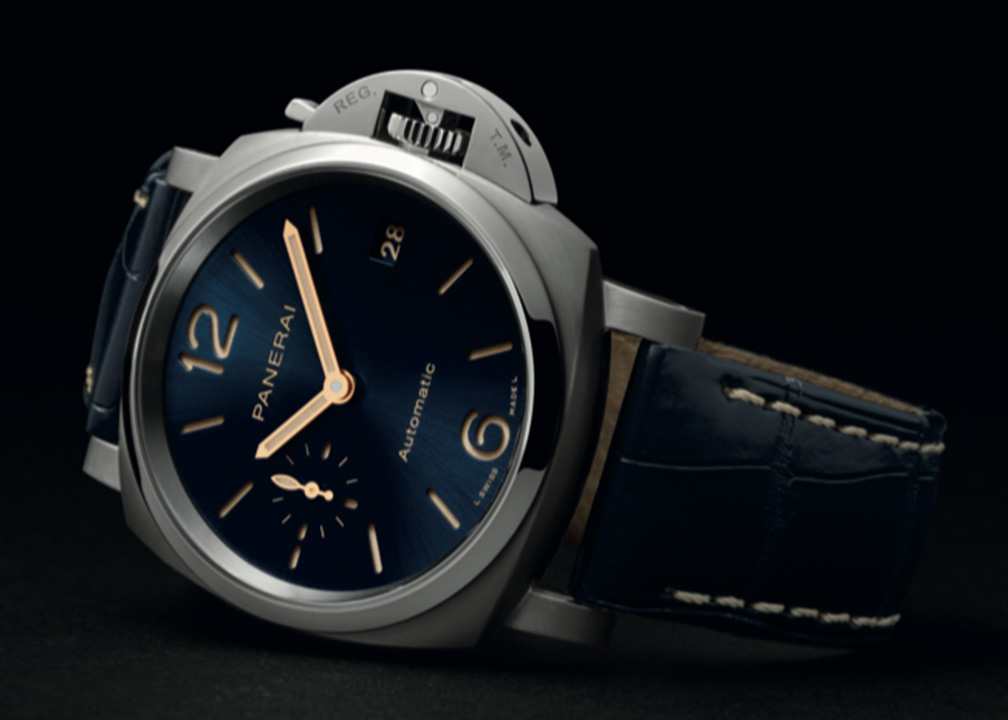 The dial is finished in one my favorite looks, the sub-brushed satinê soleil sandwich blue dial is spectacular when the light hits it just right. The hands are done in gold and are complimented with a beige faux vintage Super-LumiNova lume. There is a date window at the 3 o’clock position with a seconds sub dial at the 9 position.

They are powered by the Automatic P.900 Calibre with a 3 day power supply and featured a snap back case etched with the Luminor Due Logo. They are finished off with a dark blue semi-matte alligator strap with beige stitching.

The movement givesthe watch a GMT functionality with AM/PM indicator, Date, zero reset for the seconds hand as well as a power reserve indicator on the dial itself. 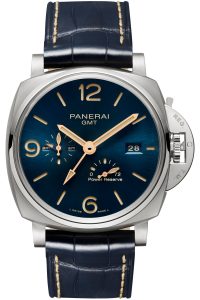 As much of a fan of the blue dials they have been done in some sort of combination of material and case design so they aren’t necessarily something that catches my eye instantly. Not because they aren’t beautiful pieces, just becuase they remind me of another watch. That is why I think the winners here are the white dial ones. I normally don’t like the white dials on a Panerai but there is something about the combination with vintage lume and painted dial that sort of work here.

I would of course have to see these pieces in person to give my final say but as for now I like them. While you probably won’t see me wearing a Due anytime soon there are going to be a lot of happy people that will enjoy picking these up.