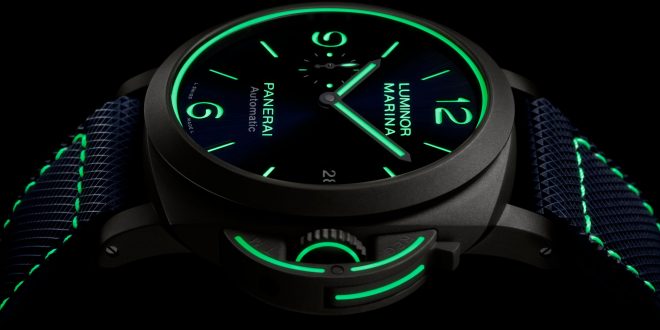 2020. It marks the anniversary of the birth of an icon in the Panerai history. It’s now been 70 years since this model was introduced into the watch making world with it’s never before seen and now unmistakable crown guard, sandwich dial, and luminous time markers. At the core of the very original and most iconic pieces in the collections you will find these three features. So it’s only fitting as last year was dubbed the year of the Submersible within Panerai circles, that 2020 will be further known as the year of the Luminor.

As we have come to understand the brand we know that they have always bordered on the edge of controversy with their large cases, crown guard, and use of materials such as bronze that were not normally used in making a watch case. True to form they have once again gone off the beaten path with three new limited edition pieces that take an already iconic piece into the future taking a few risks along the way while showcasing the items that have made this watch such a staple for any Panerai fan.

The Panerai PAM1117, PAM1118, and PAM1119 represent an interesting direction showcasing the Luminor, while making it almost impossible to ever mistake this special 70th anniversary model with any other Luminor, you can instantly notice that there is something different and unique about these 3 pieces. While I’ll touch on one of these such enhancements later with in each model, the fact that these 3 watches come with a warranty that has never been done before and really goes to show the levels that Panerai is now going to back their products. The three limited edition watches all come with a 70 YEAR WARRANTY! That is not a typo, I didn’t have too many shots of tequila, you read that right. So not only do you get an amazing looking watch, you don’t have to worry about it one bit, to be honest your kids probably wouldn’t have to worry either if they allow it to be passed down.

So now that you know about one of the crazy new things involved with these 70 year anniversary pieces, let’s dive into the actual models themselves. Since these three models have a lot in common in terms of design elements I will break them down into a few sections to compare the pieces hopefully a bit easier.

All the models in this limited edition group feature a 44mm Luminor 1950’s style case, each with a different material.

First up we have the PAM1117 which utilizes a material and technique that was before only available in one of the most expensive and complicated Panerai watches in the collection, the 3D titanium printed PAM578 is a prime example. For the first time ever the DMLS or Direct Metal Laser Sintering technique which is a process of 3D printing the watch case using titanium powder is being offered in a regular 44mm Luminor Case. Because of the ability to print the watch case from the ground up, like the tourbillon model you are able to hollow out places on the case that normally wouldn’t be possible with milling them. This technique gives Panerai the ability to yield a watch that weighs only 100 grams in total with the strap. 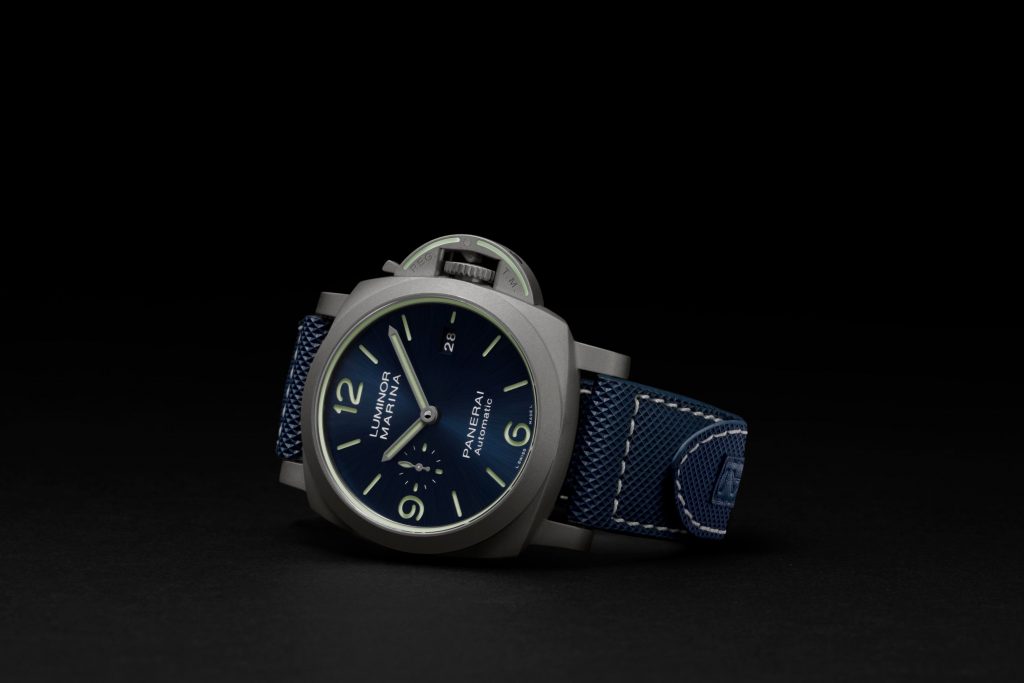 Next up we have the PAM1118, which features another material that was introduced in the submersible world but has gained a lot of love from Panerai fans, Carbotech. Featured in some of the most popular models like the PAM616 & 1661, the case is made by taking thin layers of carbon fiber material and pressed together with a polymer under extreme pressure. This method gives the case it’s strength and light weight. 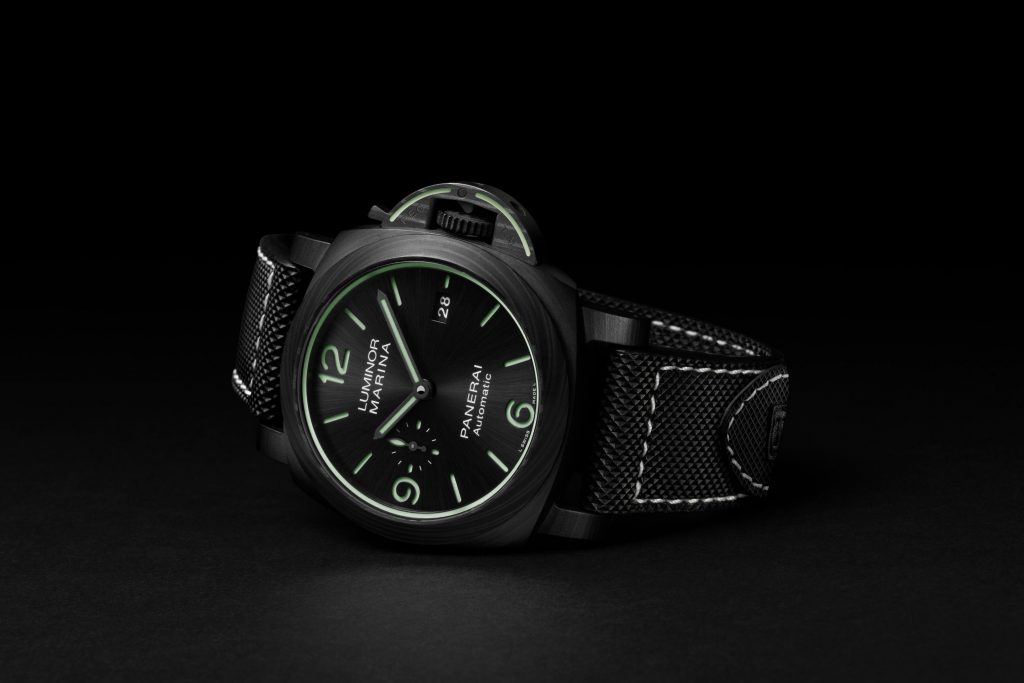 Arriving at the PAM1119, we see the use of the latest innovation in materials from Panerai, Fibratech. Normally new materials are reserved for introduction via a Submersible so it’s nice to see a Luminor get some love when it comes to newly created case materials. Fibratech, which is a natural eco-sustainable row of fibers turned into a composite which is 60% lighter steel and 100% resistant to corrosion. This material was tested in the aerospace industry and further developed and refined by Panerai to give shape this this watch as well as the PAM1663. Fibratech is made from unidirectional mineral fibers produced by the fusion of basalt rocks. These fibers are binded with plymers, become thin layers which are superimposed in a precise orientation then consolidated through a pressure and temperature controlled process. If you are curious, basalt rock is the rock that is left behind by lava from a volcano. This process gives us a beautifully textured matte grey colored case which will be unique to any other watch since it depends on the cut of the material each time. 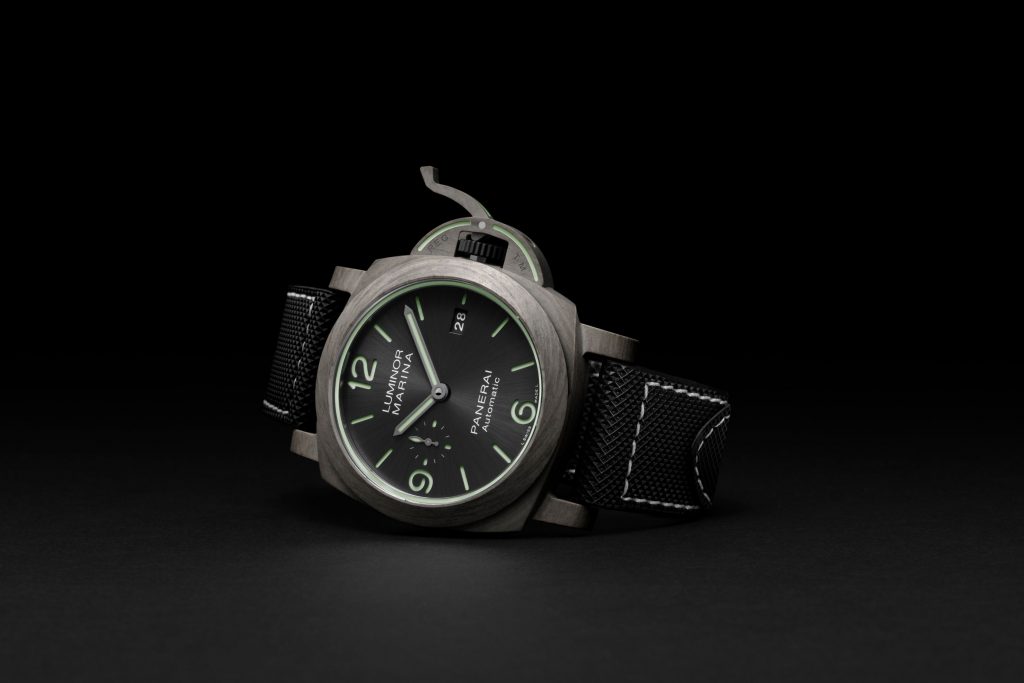 This model features a blue sunray finished dial featuring the traditional hour and minute hand, sun seconds next to the 9 as well as date window replacing the 3. All of this simplistic beauty is powered by the workhorse P.9010 calibre 3 Day Power Reserve Automatic designed and executed in house by Panerai. 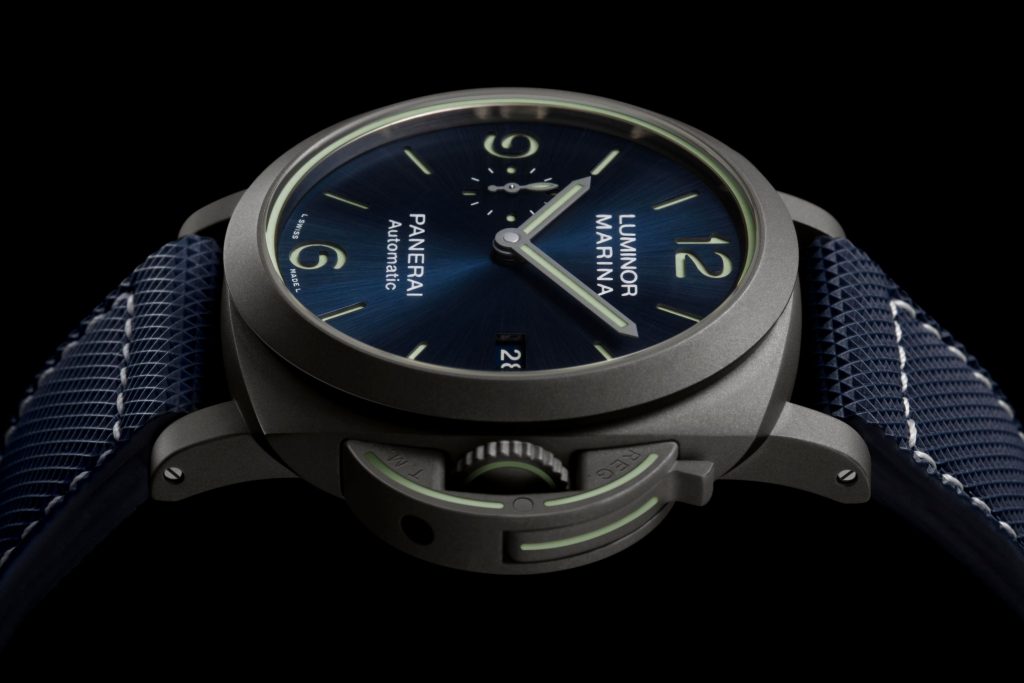 This version features a black sunbrushed dial which works perfectly with the stealth look of the carbotech material of the case. As with the other 2 models it has the standard minute and hour hands, sub second dial to the right of the 9 and a date wheel in place of the 3. 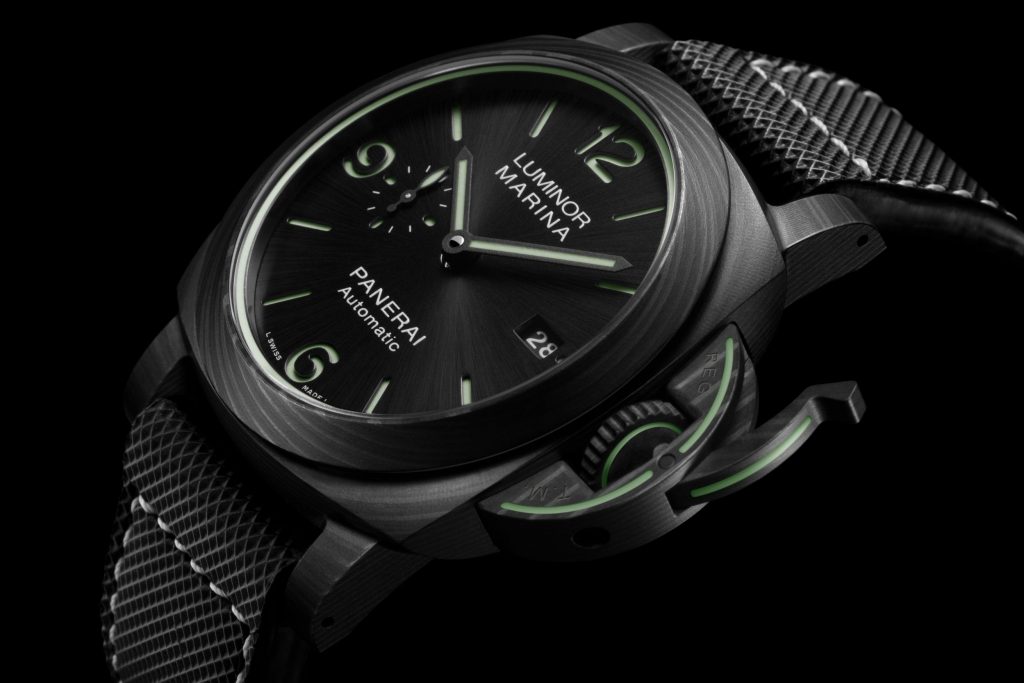 The Fibratech version features an anthracite grey sunburst dial which plays off nicely with the matte grey Luminor Case. 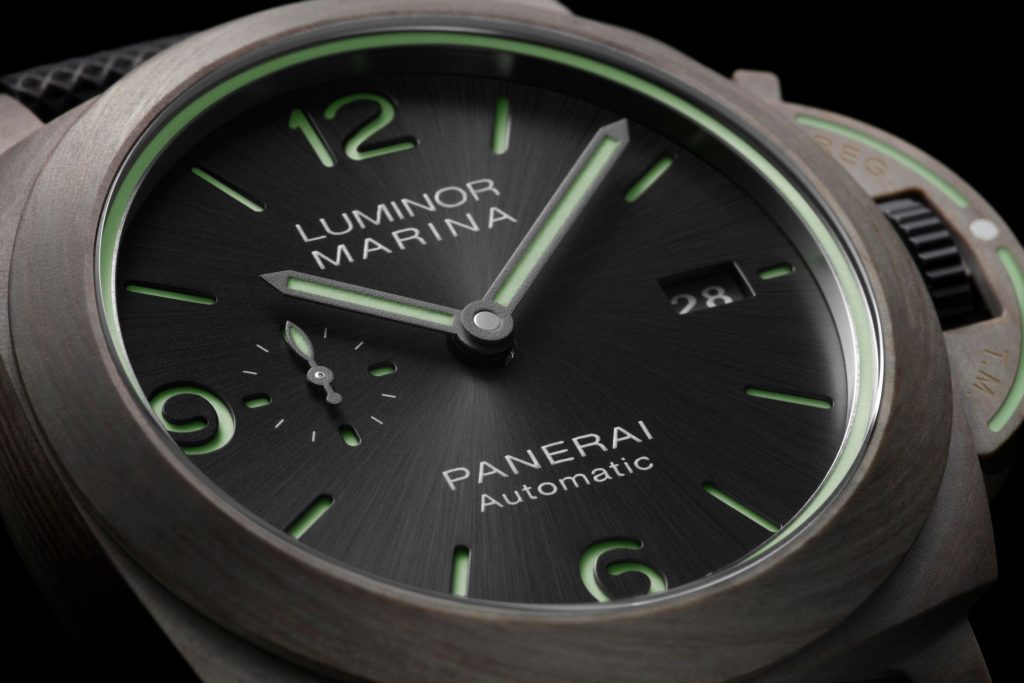 All of the models in this collection feature the new thinner version of a workhorse movement from Panerai. The movement is a 3 day power reserve automatic P.9010 movement with 31 jewels, 200 components, 28,800 alternations/hour, Glucydur balance, Incabloc anti shock device, and two spring barrels. This movement of course is executed entirely in house by Panerai.

Panerai has now taken the lume to the next level, or should I say the X1 level. That is the newest version of their Super-LumiNova which now provides an ever brighter and higher degree of luminosity of their can’t miss green lume color. By the way, this lume is so iconic it even has a Pantone color now associated with it which is 802C in case you wanted a gallon of this paint to put all over your walls.

They didn’t stop there when it comes to the lume on these watches. We have come to expect the hands, markers, and numerals all to glow that beautiful green, but now you see accents all over the watch that glow. From a ring in the inner bezel, to the crown guard, lever, as well as the crown get dressed with a bit of lume. Oh, and if that wasn’t enough lume to brighten up any dark room, they even implement lume in the stitching of the the strap that comes with the three watches. 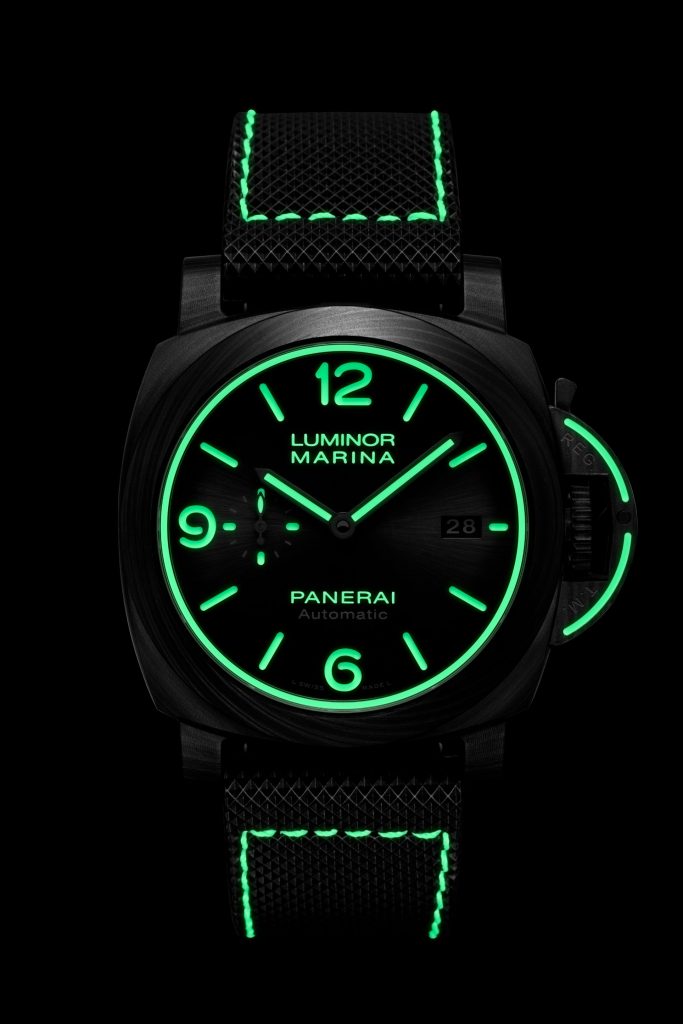 As mentioned earlier in the article, these 3 Panerai pieces come with something that has never been done by any brand, come with a 70 year warranty. In case you forget that you have a 70 year warranty then have no fear. Panerai made sure to give you a nice etching on the solid case back on these pieces letting you know they have your back. 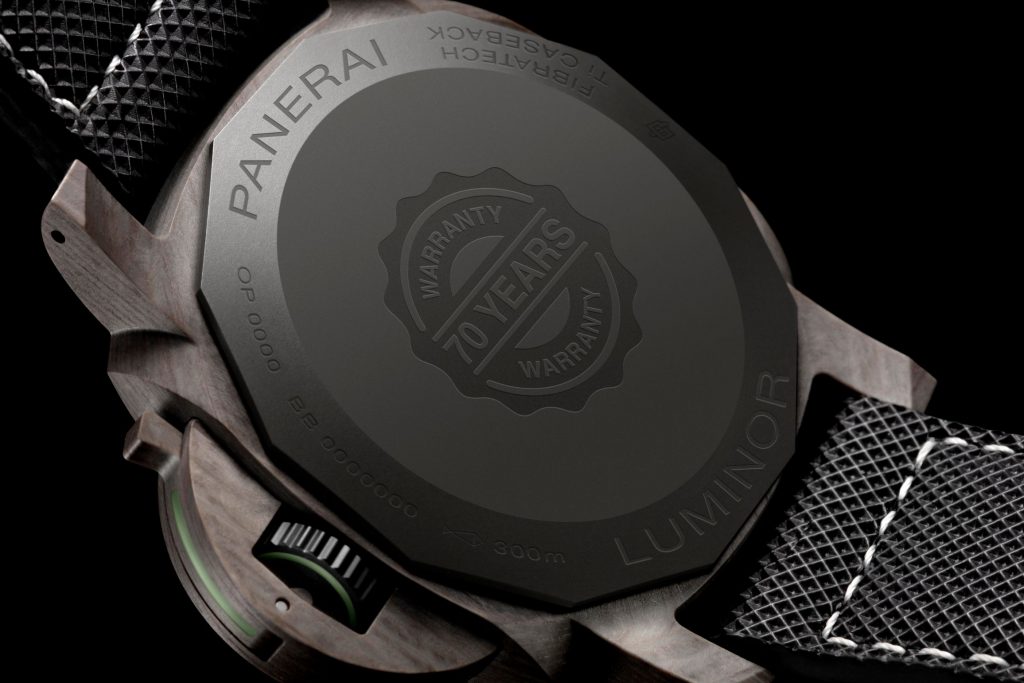 Well where do I start with some thoughts on these new pieces. For one thing it’s honestly crazy to think that these pieces really do come with a 70 year warranty. Considering it was only a couple years ago that they made the PAM700 LAB-ID with a 50 year warranty that wowed everyone. I think it’s really nice to see a brand standing behind what they are creating and letting the public and other brands know that through this guarantee.

While we have seen the other two materials used in other watches before, you didn’t normally see them in Luminor models with this iconic dial configuration. You saw the DMLS in an almost grail watch for the majority of the world, and Carbotech was never used with this type of dial configuration in a Luminor. Now we have a new material that from these renderings and studio images looks really slick. It’s almost like a grey version of the carbotech in terms of how it has a very unique pattern given the organic nature of the material. I really want to eventually see it in person to see if it works as well as it does in pictures but this could be another winner for the ever innovating Panerai Laboratorio di Idee.

Okay let’s get to the elephant in the Lume, I mean room. I think this is something that is going to be a huge talking point of the Panerai community. I mean I can with 100% certainty will think it is going to cause a divide.  Why do I think that way? It’s mainly becuase Panerai fans tend to be very passionate and a lot of them are very engrossed in the iconic looks of the watch. These 3 new pieces push the envelope and really enhance the things we have come to know Panerai by.

The almost “Tron” like lines and lume might be a bit much for most people when the lights go down but one thing is for sure, you will be able to tell these 70 year anniversary pieces from a mile away. The inner lume around the bezel area I think is a real winner, it’s the other accent pieces that will be the real test.

The one part that I think is a bit more on the gimmick side for me and I think will get old is the lume stitching. I personally think the novelty of it will wear off fairly quickly with me. Thankfully I change my straps out so much that it shouldn’t be a problem.

Overall I do like the offerings these three bring to the table. All of them are unique in their own way and should fine homes pretty quickly amongst collectors. Let me know what you think in the comments below!

All three models are boutique exclusives and will be available by December 2020. Each one is limited to only 270 pieces.

Panerai & BRABUS Team Up to Give Us The PAM1240 Submersible