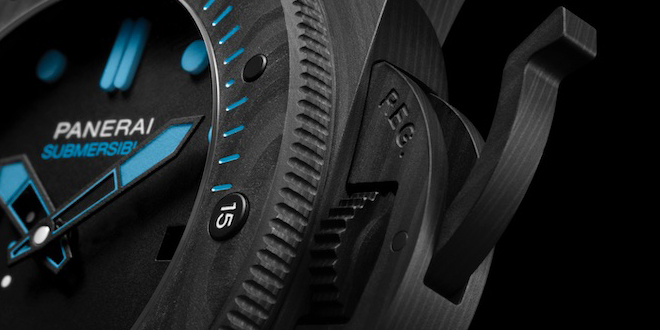 SIHH2015 was the first time I ever got the chance to attend and see the new Panerai releases up close and person. It was at this show that I was introduced to the piece that made me smile the most. The Panerai PAM616 Carbotech. It was the first ever carbon fiber style watch Panerai had ever created and they did it in amazing style as they always do. After a few years they released their second watch that featured the lightweight and unique patterned material that is made from layers of carbon fiber. This model was a 44mm Luminor Marina model known as the PAM661. 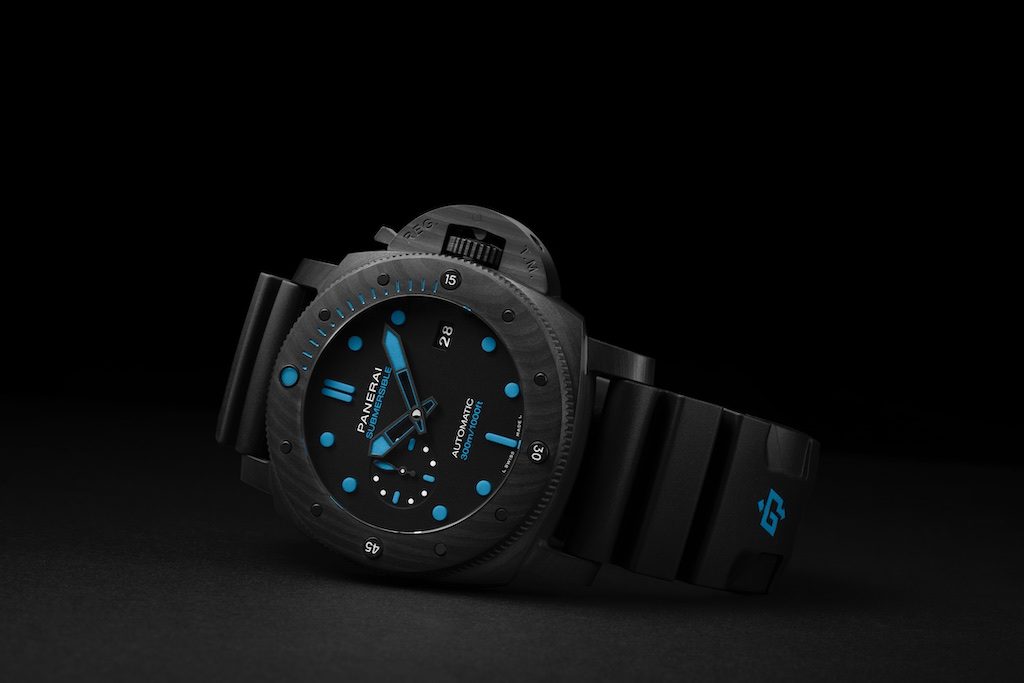 Fast forward 4 years later and here we are at SIHH2019 in Geneva and 2 new Carbotech Submersibles will be joining the family. We have the Panerai PAM1616 which is the revamped and face-lifted version of the PAM616 and the new PAM960 which is a 42mm version of the Carbotech Submersible that is sure to make a lot of smaller wristed Paneristis happy. We have already seen a trend with Submersible watches being the highlight of this years releases at SIHH2019 and even more so with a dedication to bringing more 42mm submersibles to the masses of people who can’t always wear the 47mm versions.

As we learned from the previous model, the Carbotech material is lighter than steel and titanium and highly resistant to external shock and corrosion. The case material is based on carbon fiber and introduced and created by Panerai by compressing the sheets of fiber at a controlled temperature under high pressure with a polymer known as PEEK (Polyether Ether Ketone) which bonds the composite material together making it even tougher and more dependable. 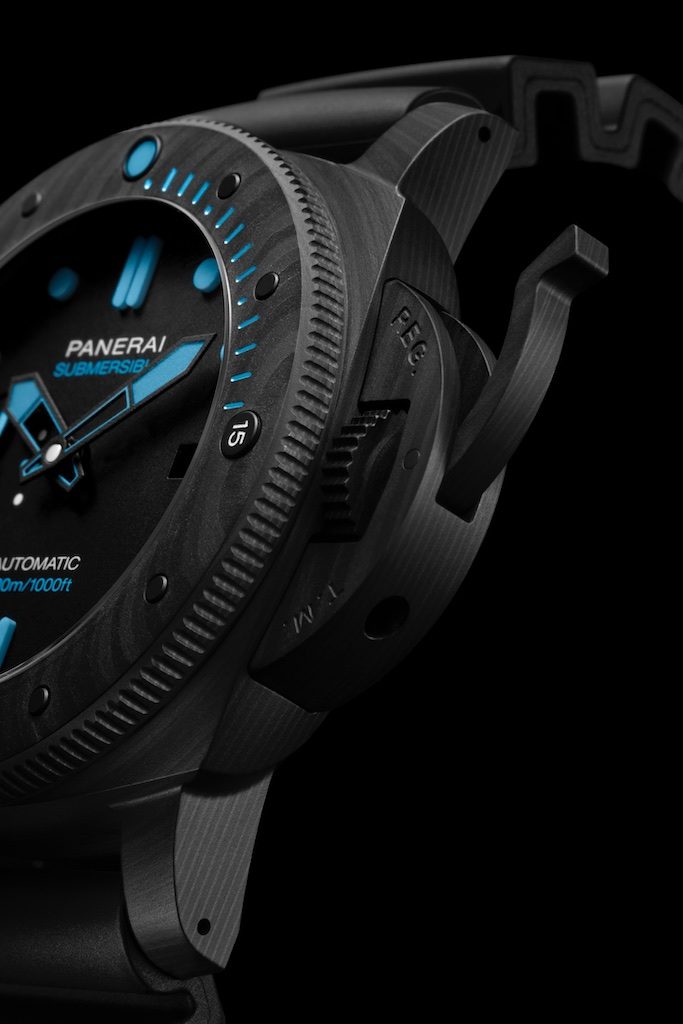 The only difference between the PAM00960 and PAM01616 is the diameter of the case. One follows the historic lines of the 47mm Panerai watches while the other brings a more wearable version for people with smaller wrists that have been wishing for a smaller version.

Both submersibles feature a black dial with striking blue indexes that have a a new look created by 3D Blocks of Lume that are raised on the dial, matching blue lume hands for the hours and minutes, as well as the sub second minute hand that is over the 9 o’clock position. Even though that all the markers are blue in day light, when darkness falls, the. minute and 12 o’clock index actually emit a green light as compared to the rest which will shine blue. This will help you tell the time much easier since they won’t blend in. 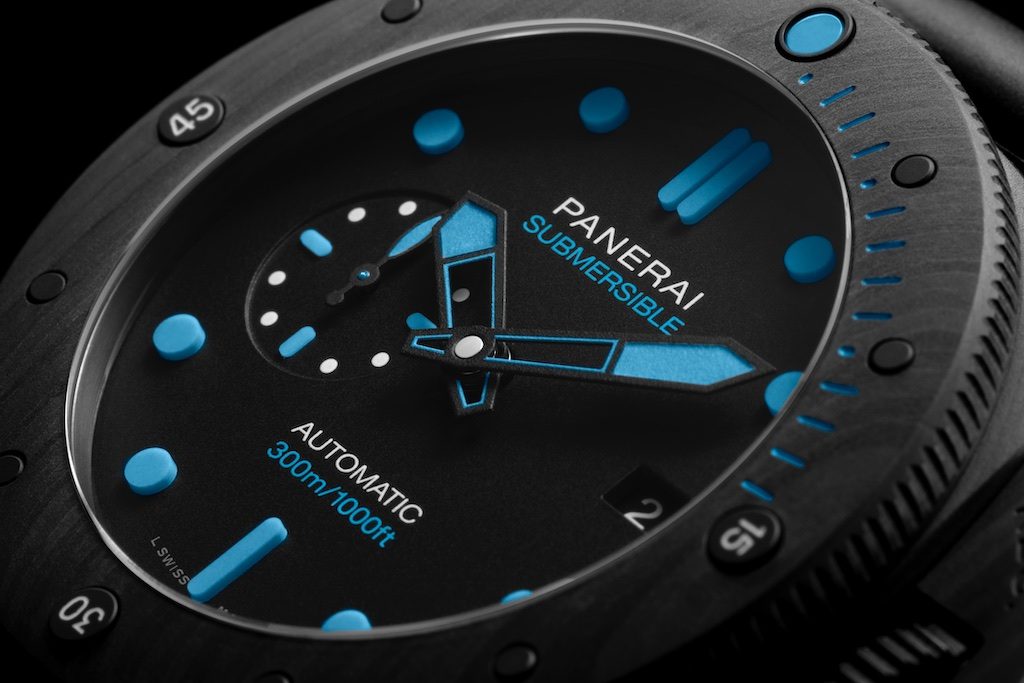 Compared to the older version the text has also changed on the dial. The original Carbotech’s top two lines said “Luminor Submersible” while the new one says “Panerai Submersible”. Then the bottom two lines of the PAM616 said “Panerai Automatic” while the new version says “Automatic 300m/1000ft”.

As with the other submersibles it has a 300 Meter depth rating aided by a solid titanium case back which houses the automatic in house P.9010 movement in the PAM01616 and the OPXXIV calibre with 3 day power reserve in the PAM960 which is a smaller size to fit in the case. Finishing off the watch is black rubber strap with the OP logo in the same blue to match the dial and a trapezoidal buckle that is made of titanium and DLC coated black. 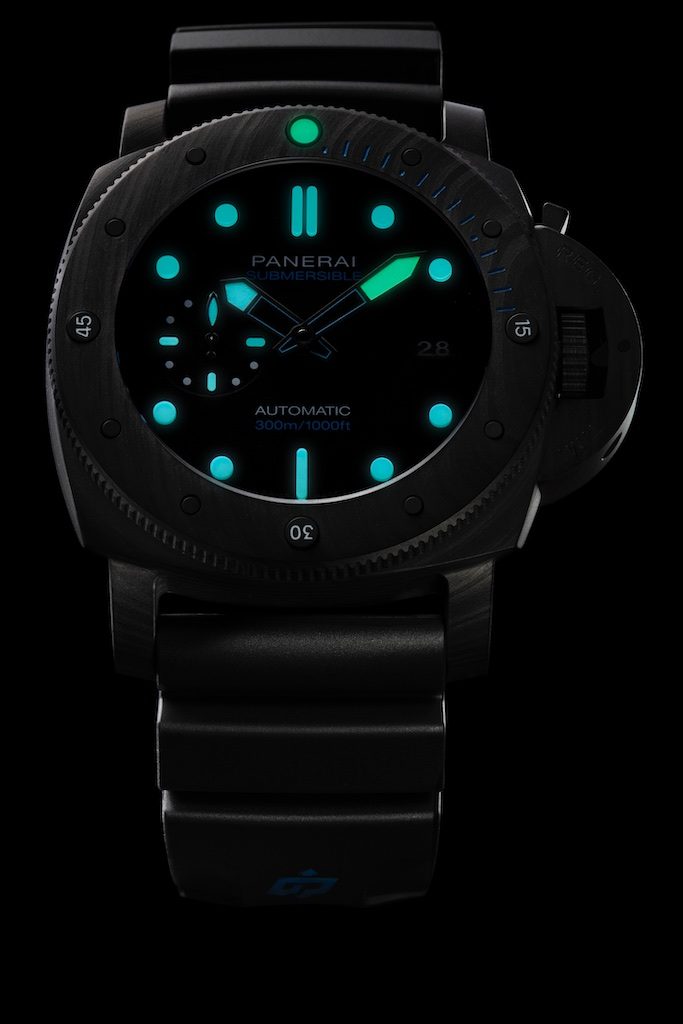 Looking at the PAM616 and 1616 side by side it’s hard to say which one I like more. I’m a big fan of the blue so my initial impressions are positive but i will wait till have some more hands on time before I give you my final verdict. This release ultimately probably means the PAM616 could be phased out in the near future so it will be interesting to see if this new version has the same excitement as the original. If I was to predict, the 42mm version is going to have a lot of suitors right from the start.