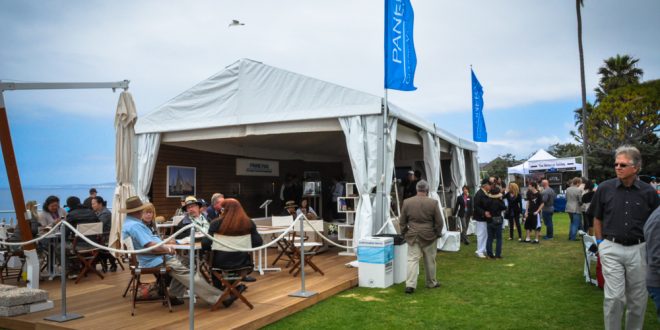 This past Sunday I was given the luxury of attending the La Jolla Concours D’Elegance as a guest of my favorite watch brand, Officine Panerai. When I first got to La Jolla I was worried the weather would not hold up because of all the clouds in the sky. For my own selfish reasons, I was hoping that the day would stay sort of cloudy because it lends itself to some of the best pictures since there won’t be as much glare on the watches and cars. I arrived at the Panerai boutique which is adjacent to the CJ Charles Jewelers around 9:30 in the morning. I was greeted there and whisked away by golf cart by the Panerai Boutique staff and dropped off right by the front gate.

I did a quick walk through of some of the cars because my primary focus was to hit up the Panerai exhibit and hospitality lounge located right near the main stage. When I made it to the lounge I was taken aback at how nicely done the display was done. It looked like it was something that belonged on a resort somewhere. I was eventually greeted by Michele and Allison from Panerai in New York and they instantly made me feel right at home even though we had never met before. After speaking with them a bit they gave me a little background on the beautiful lounge that was built for Panerai. Looking at the inside of it you immediately noticed that it really took a lot of it’s design from the inside of a classic sail boat. The lounge is constructed from wooden planks that were hand made by Italian artisans and put together piece by piece at the show. Towards the back wall the planks curved up and went to the ceiling as if you were inside a boat. These little details in the construction of the lounge truly blew me away. To me it was a testament of how much detail Panerai puts into everything they do for the brand.

Construction of the Panerai VIP Lounge

The display was decorated throughout with different nautical items, Panerai books, and of course cases filled with amazing Panerai watches. In a few of the displays they had some of the new offerings that were presented at SIHH 2014 such as the PAM579, PAM447 Pocket Watch, and a few of the new 42mm offerings.

At the event I had the chance to talk to a lot of different Panerai enthusiast and get some great wrist shots along the way to share with my following on Instagram. It was really an amazing atmosphere and you were able to really get to dig deeper into why everyone is so passionate about this brand. One of the highlights of the day was when I was introduced to the President of Panerai North America, Rafael Alvarez. It was a pleasure to sit down and speak to him about a brand I am so passionate about. Just getting a little insight into everything they do and the direction the company is going to take as a whole was a great honor in itself. While speaking with Rafael I was drawn to the gorgeous piece wrapped around his wrist. Mr. Alvarez was sporting the new Limited Edition Platinum PAM518 Radiomir 1940’s Platinum Chronograph. Without hesitation he took off the watch and let me handle it and take a look at the gorgeous Minerva movement which is the heart of this watch. I had only seen pictures of it from SIHH and all I can say is that they do not do this piece justice. The PAM518 is an elegantly made watch on all levels. I knew I couldn’t pass this opportunity to get a wrist-shot with Mr. President himself. So I was able to snap this great picture with Mr. Alvarez, Vahid Moradi (Owner of CJ Charles Jewelers and the La Jolla Boutique), and myself to post.

This leads me to the next amazing person I was able to meet and greet with, Mr. Vahid Moradi, President of CJ Charles Jewelers in La Jolla, California. Mr. Moradi is one of the originals when it comes to Panerai and he continues to share that passion after all these years. I wasn’t aware until Sunday that the La Jolla boutique, which is adjacent to the the CJ Charles Jewelry store,  is actually one of the very few Panerai Boutiques that are privately owned. All of this came out through the hard work and persistence of Mr. Moradi and his continued drive and passion for the brand.

As the day winded down I was also shown a few other pieces that really were impressive. The PAM579 Destro was definitely an eye catcher with it’s gold hands. They also brought out the PAM477 Rose Gold Panerai Pocket watch that was definitely very easy on the eyes. Out of all the amazing and rare pieces I saw in person, one that caught my eye was the super rare and historic PAM195. It was the first ever watch issued to Paneristi members and was limited to only 200 units. On top of the rare nature of the watch Panerai even engraved each owners name into the solid case back making each one truly a one of a kind piece.

I have to give a great big thanks to Michele and Allison of Panerai who invited me and took care of me the entire day. It was a pleasure meeting you and look forward to many more events in the future. I would also like to thanks Vahid of CJ Charles Jewels and of course Rafael Alvarez, President of Panerai North America,  for putting on such an amazing event for all the Panerai enthusiasts in the Southern California area to enjoy. Than you to the staff of the La Jolla Boutique as well for showing me all the amazing pieces at the event.

Pictures from the event – Credit to CJ Charles Jewelers