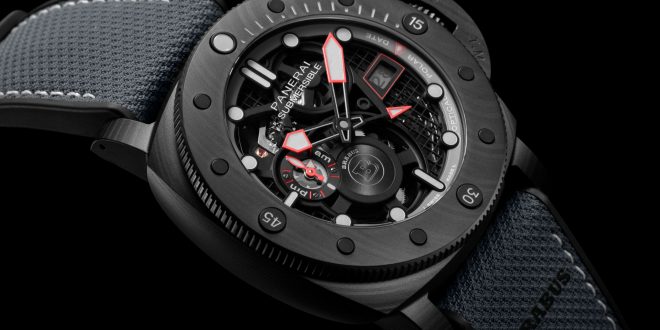 Panerai & BRABUS Team Up to Give Us The PAM1240 Submersible

Panerai isn’t a stranger to collaborations in recent years with Jean-Marc Pontroué at the helm. We have seen them partner with Italian Designer Prada and the Luna Ross Yacht Racing team, start new experience pieces with icons and fans of the brands such as Mike Horn, and even got the Italian Combat Force Comsubin to team up for a special watch and experience.

It’s very evident that the brand is pursuing all angles and trying to form strategic partnerships with brands that embody a lot of the same ideas and visions as that of Panerai. So where does a super car designer known for their amazing enhancements to Mercedes Benz vehicles come into play with a brand married to the sea?

If you look a bit deeper into BRABUS you will find that the have been redefining the luxury day boat market with their Black Ops models.  And there we have it, an innovative luxury company that not only makes luxury supercars, but also boats which ties into Panerai’s heritage instantly.

The two brands are known to be unconventional in nature and pride themselves on innovating while taking calculated risks where they seem fit.

Panerai CEO, Jean-Marc Pontroué stated that, “When we speak about partnership, it’s not just about a logo, it extends to the highest levels and smallest details. We offer each other complementary skill sets and synergies in terms of products, sales and key markets. The ideas, materials and technologies of our brands will be a vehicle for developing concepts that are both disruptive and spectacular. All of these elements will come together to create results and added value to the benefit of our clients, in terms of service, retail concepts and calibers.”

With what they believe to be a natural fitting they have given birth to a 100 piece Limited edition piece. It is known as the Panerai PAM1240 Submersible S BRABUS Black Ops Edition. It is the first ever Panerai to be a non Tourbillon featuring a skeletonized case showing off it’s movement. 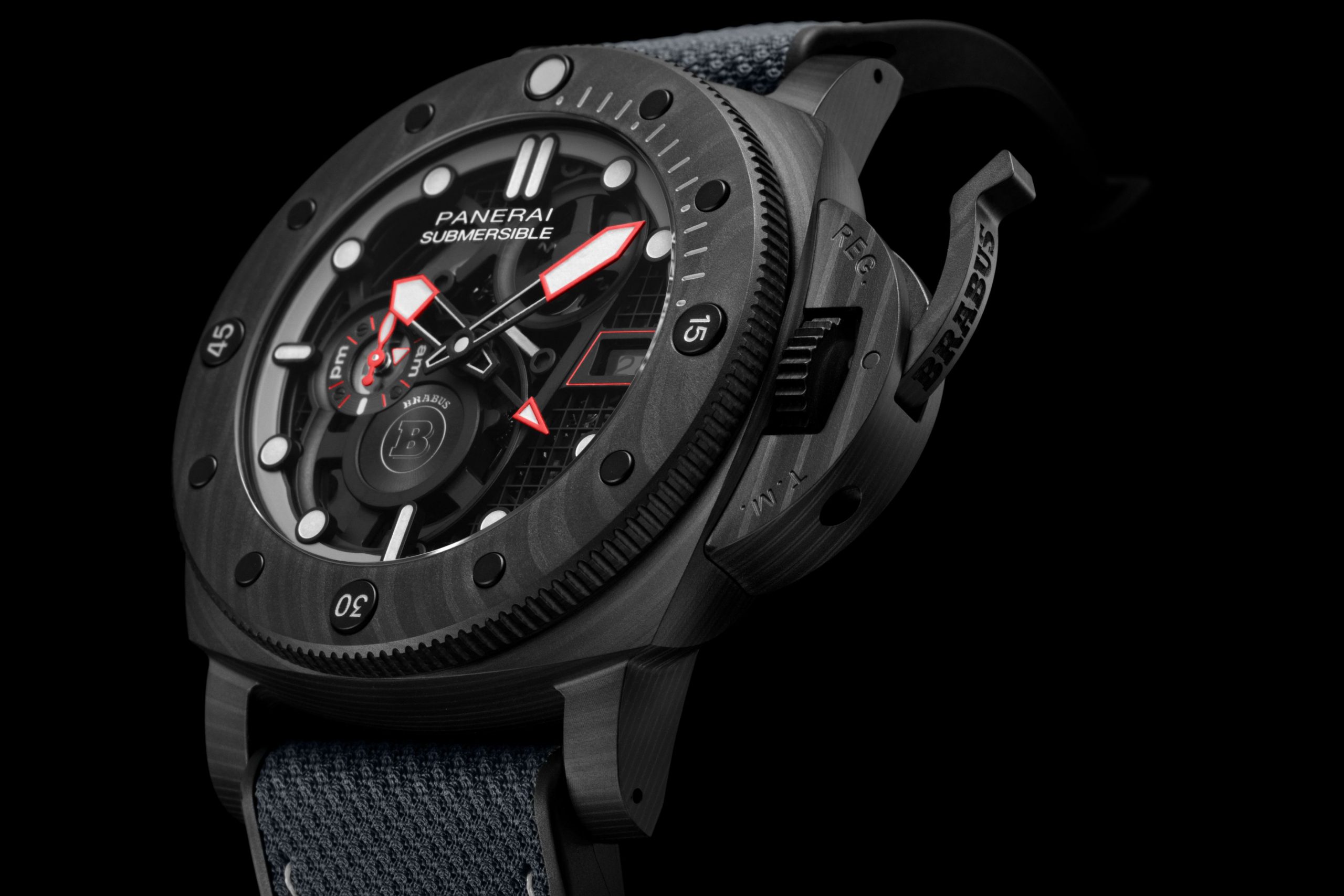 In the case of the PAM1240, this movement is the P.4001/S automatic movement with 3 days power reserve. Taking a look at the case back you will notice an off centered oscillating rotor made of tungsten that allows for the winding of the watch in any direction. 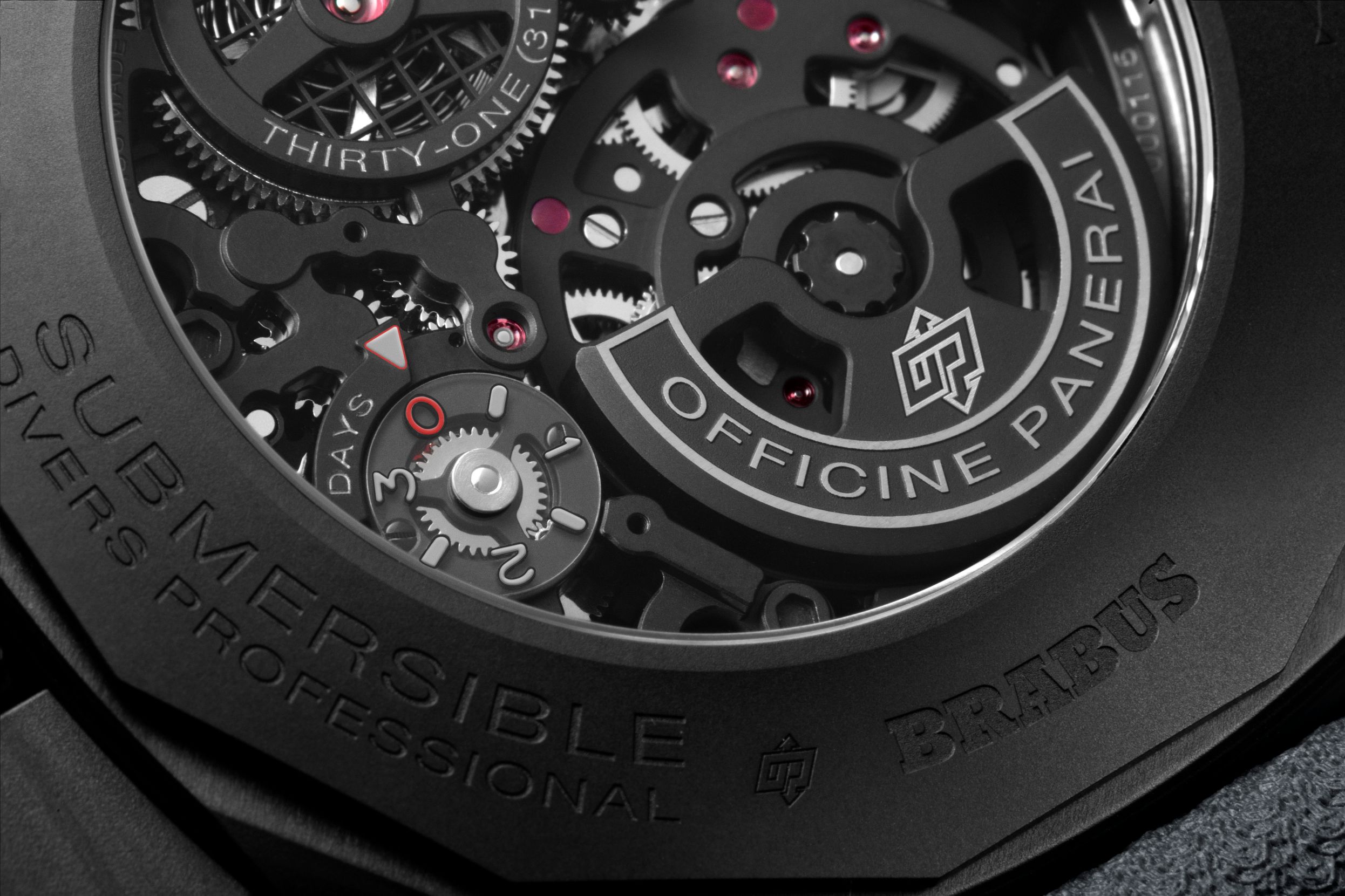 Taking a look at the dial on the PAM1240 you will notice gunmetal grey indexes and accents on the hands that are paired with eye catching red trimmed hands and markers synonymous with the BRABUS line of cars and boats. The watch is housed in a 47mm Carbotech case with matching bezel. Taking a deeper dive into the dial you do notice the BRABUS logo above and slightly to the let of the 12 o’clock index. 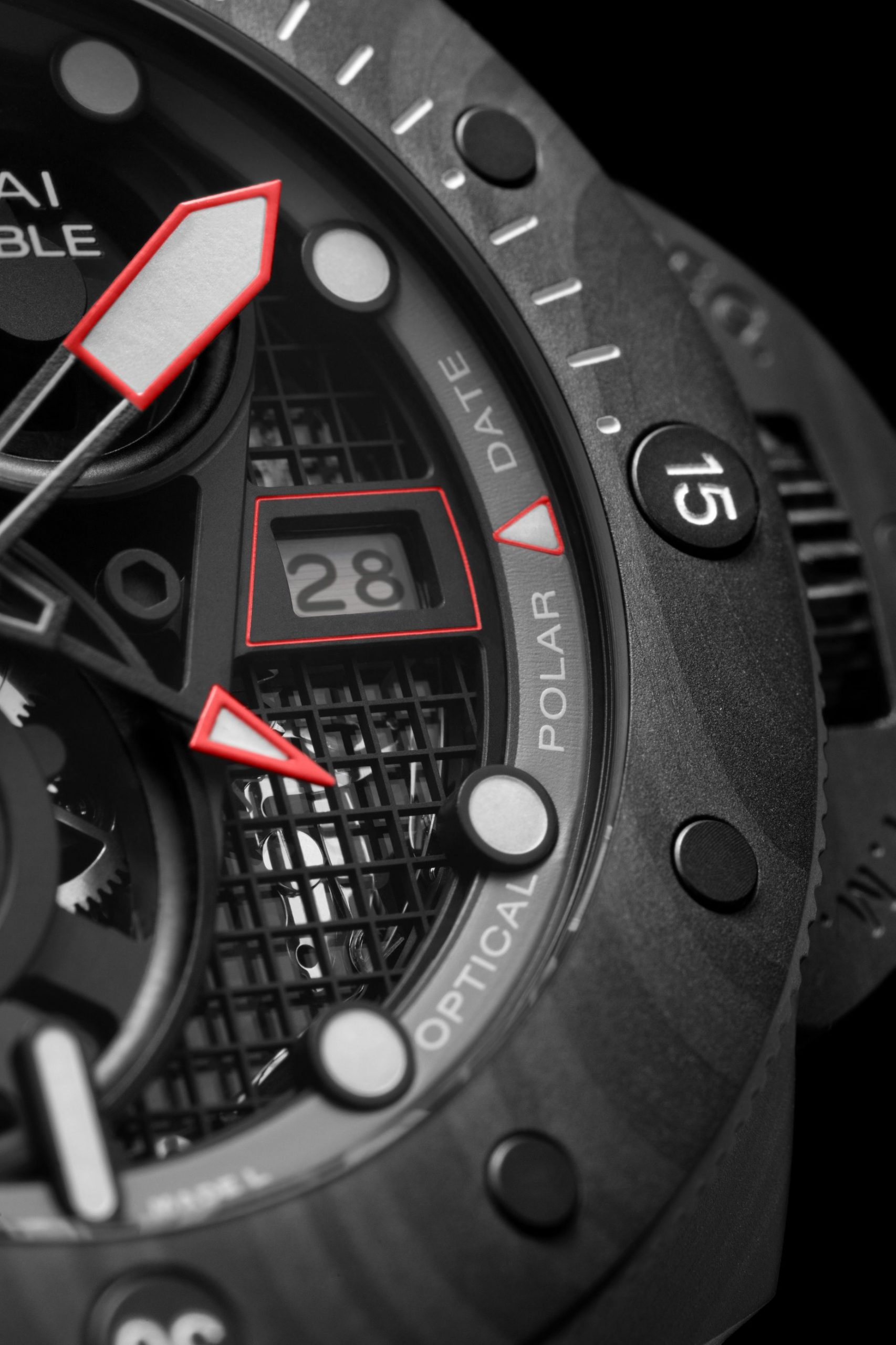 The watch does feature a GMT function and an AM/PM indicator on the sub second dial at the 9 O’clock side. It carries a 300 Meter water resistance which is only fitting for a Submersible piece by Panerai.

Now that we have the black and white info on the PAM1240, let’s dig into some of my thoughts on this piece. Panerai enthusiasts have been clamoring for a non tourbillon skeleton for as long as I can remember. Now that we have it, I personally wish it had not been a collaboration piece since it’s the first time it has been done. I think it would have been such a larger hit if they released their own limited edition skeleton before this type of partnership, but then again it’s not my call and I don’t get paid the big bucks.

Having said that, I do enjoy the look of the watch from all aspects with the exception of one and I think that most people will probably harp on the same thing. Panerai fans don’t even like the word automatic on the dial so I know that the Brabus logo front and center is probably going to put a few people off. I do still believe the overall look of the piece and the limited nature will have this thing sold out to the right clientele instantly. Even if the MSRP on this piece is 45,000 Euro.

I think the logo could have been strategically placed on the back, maybe on the rotor, or just made a bit smaller and it could have worked much better.

Initial thoughts on the PAM1240 Black OPs Submersible has been a bit mixed as you can see on the post I did about the release. That is not anything new with Panerai these days, or even historically for that matter. A brand that has such a loyal following and community will always have something to say. You won’t be able to please everyone with anything that is going to be done but I’ll wait to see how opinions change over the next few months on this piece. It wasn’t too long ago people were hating the PAM382 Bronzo and now it’s an icon.

I do hope that we see a skeleton regular production piece in the future that is at a reasonable price for my own sake, but it’s good to know that they have thought of it and it’s definitely in the pipeline.