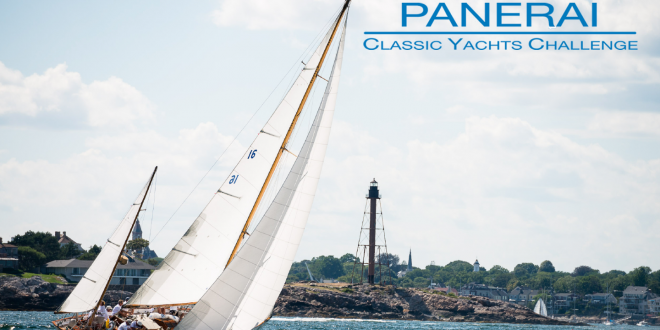 This past weekend the 1st Regatta in the U.S circuit of the Panerai Classic Yacht Challenge (PCYC) was held at historic Marblehead.  The small harborside community north of Boston which is home to local classic sailers and a handful of yacht club commodores once again plaid host to a leg of the PCYC. Hundreds of sailers came from near and far to celebrate the 17th annual Corinthian Classic Yacht Regatta. Fifty-five yachts registered for the PCYC North American Circuit opener with 18 yachts competing for the Panerai Prizes.

The 2 day regatta began Saturday Morning and concluded Sunday evening with the annual Prize-Giving Ceremony presented by Officine Panerai North American President Giovanni Carestia. Like any Panerai hosted event, the weekend was not only filled with sailing but also warm Italian-inspired  gatherings and dinners.

The first winner of the of the event was the 1929 Sparkman & Stephens Yawl DORADE which claimed the Panerai prize for first place in the Corinthian Classic Division and Best Overall among the Panerai Division.

The second was the 1970 Sparkman & Stephens 12 Meter VALIANT who took home first in the Grand Prix Division.

2016 marks the 12th consecutive year that the Florentine watchmaker has honored it’s commitment to promoting yachting colture and classic sailing with the sponsorship of a series of regattas (with two multi-race circuits among them in New England and the Mediterranean). For the 7th consecutive year Panerai has sponsored the Corinthian Classic Yacht Regatta, the season opener for the now 4-part North American Circuit, which this year added the 2 day Sail Nantucket Regatta coming up next August 19th to the 20th.