This past year we have seen the Swiss watch industry pivoting a bit and stepping slightly out of the box in their marketing and sales tactics. With sales lower than expected all around a few notable brands have partnered up and done some exclusive time pieces with watch enthusiast groups and online blogs/curators, and even with social media channels to boost sales.

Out of the blue Omega announced the release of a special edition Speedy Tuesday which is a play off of the hashtag that was created via different social media outlets such as Instagram. It has transcended to a number of limited edition pieces from brand powerhouses like Vacheron Constantin done in conjunction with the online publishing powerhouse Hodinkee. Both of these examples seeing their pieces sold in record time. Needless to say that the online revolution in Swiss Watch sales is taking on a bigger role.

In the case of Panerai, we have seen a few new releases that have been boutique only models which can only be bought at the boutique. Well what do you do if you don’t have a relationship with the boutique, or you live in an area that doesn’t have a boutique near you? I guess you might be out of luck. This is where Panerai joins the game with this new strategy.

For the first time ever, Officine Panerai has released a Limited Edition watch that can only be bought via their E-Commerce platform in the United States. This is the biggest news on the e-commerce side of the business for Officine Panerai since their website relaunch which included the ability to purchase watches & accessories directly online if you didn’t have direct access to a boutique or reseller.

The new Limited Edition is the Panerai PAM731 Luminor Marina Submersible 44mm in steel. The new Submersible is going to be limited to only 100 pieces produced for the US marketing and only going to be sold via it’s E-Commerce platform via this link (PAM00731). If you recieve any errors while ordering online you can always reserve yours via phone by calling direct at 1-877-726-3724. 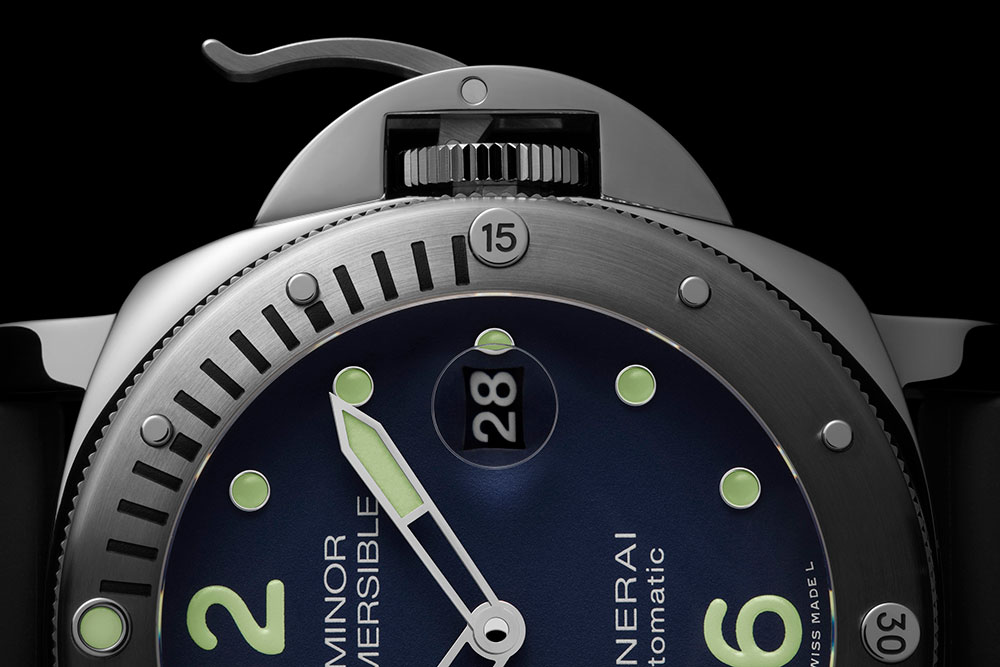 Staying the course when it comes to the sea, they decided on a true divers watch which is rated for up to 300M and features the classic Luminor case that you would find on the PAM024 submersible. The 44mm polished case is made out of 316L steel and features a unidirectional rotating brushed finish bezel for calculating immersion time. The 44mm steel case is sure to appeal a larger audience of buyers as opposed to the more commonly seen 47mm divers that Panerai has recently released. A quick glance at the comments on my page will reveal a slew of buyers that have the same thing to say, “I wish this was a 44mm so I could wear it”.

Sticking with what has been working in the recent releases such as the PAM671 Bronzo, Panerai opted for an intense blue dial featuring the iconic submersible dots for the indexes. At the 3 o’clock position you have a date window beneath a magnifying lens while at the 9 o’clock position is occupied by a sub second dial. The hand, numbers and index dots are done in the classic green lume for perfect legibility if you ever decide to go diving with the PAM731. 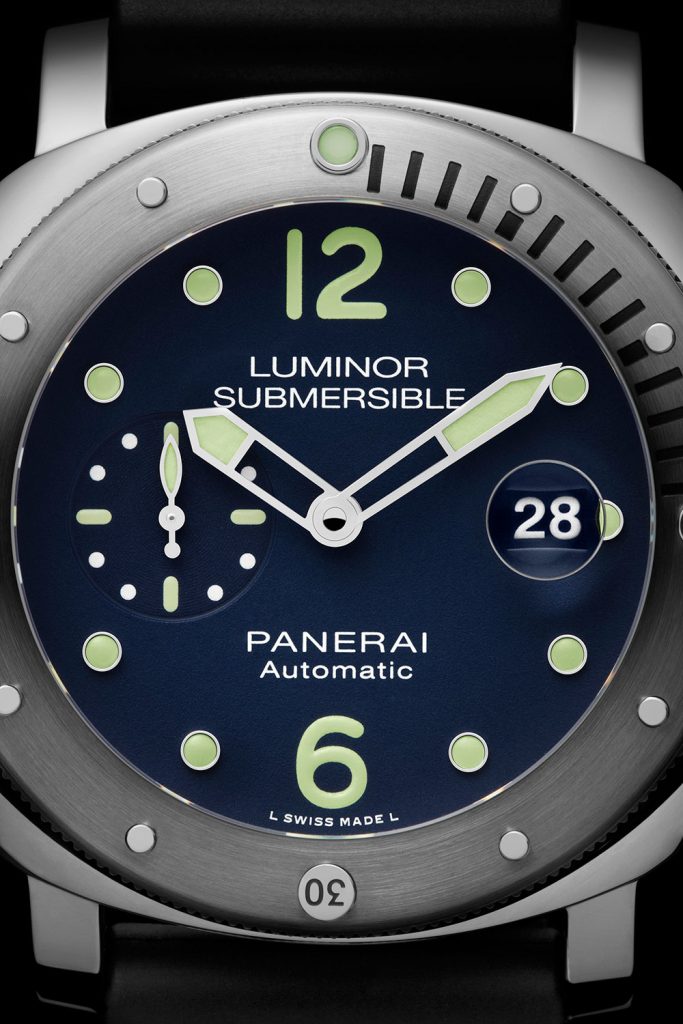 All said and done, it’s a nice piece that has been put out by Panerai in terms of aesthetics. I know a lot of my own followers have been looking for a submersible like this with a blue dial and in 44mm as opposed to most of the new pieces which are 47mm. If it was a regular production piece I think it would be a great choice for a lot of buyers. Being a limited edition piece will make it even more desirable in my opinion. 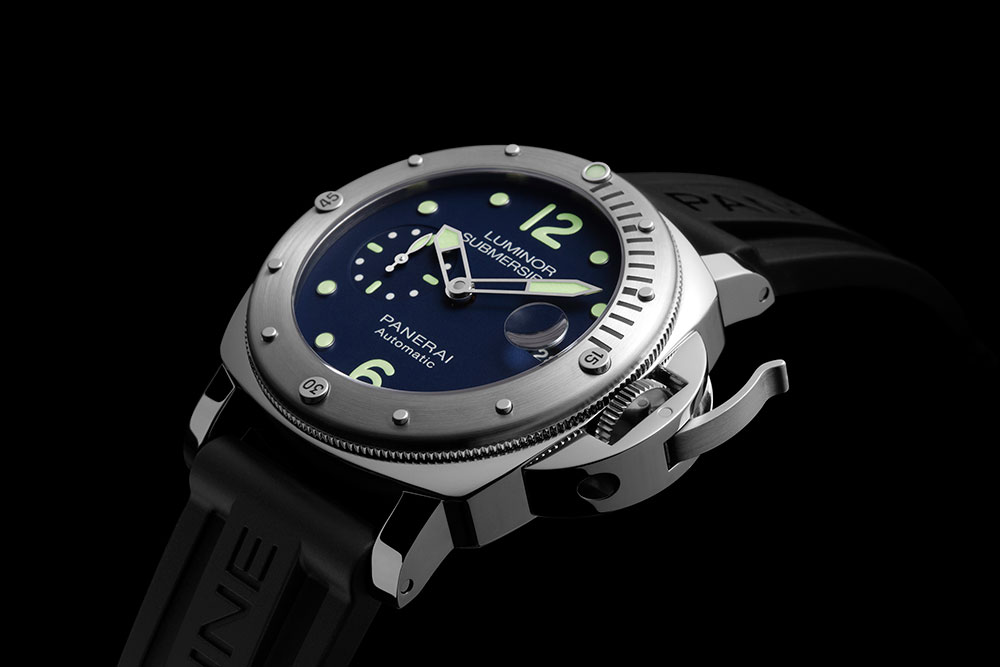 The question will remain if the buyers will jump on board and take a chance buying a piece only from pictures. The precedent is definitely there as we have seen a number of these online only exclusives sell out in mere hours. Panerai took a very safe and smart route for their first ever E-Commerce pieces and I don’t blame them. I think they needed to make sure they came in with a model that will appeal to a lot of buyers and put it at a price point that is not going to break the bank either. The limited edition PAM731 Luminor Submersible has a price of $7,200 USD which is quite reasonable given how limited the watch is going to be.

It’s definitely a step in new direction for a brand that seems to not always fully embraced the trends in the digital marketplace. Probably not because they don’t want to but more because the brand has always had a traditional way of doing business from day one. It has been the staple of it’s business and has worked well for so long. But It’s time to jump in and Panerai has done just that and I will definitely be following this release very closely.