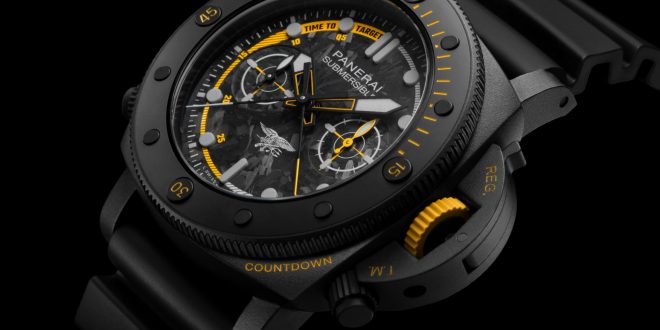 If you are a Panerai fan you are well aware of the extensive history and connection they have with the Italian Military. This connection helped solidify the brand’s connection to the sea and pioneer covert exploration. This legacy now continues with a military partnership with the U.S. Navy SEALs and three brand new watches in the collection.

Each of the three pieces are characterized as instruments with specialized diving features and have been approved by the elite military force.

The first piece in the collection I want to discuss is the PAM1324 Submersible Navy SEALs Carbotech Edition which is limited to only 162 pieces. This number is chosen to honor the year that the Seals were founded, 1962. The Carbotech edition features a 44mm case made completely of Carbotech including the bezel. The forged carbon dial features grey lume indexes and is accented with golden yellow along the hands, crown guard, and rubberized crown.

This piece is the first 44mm watch from the Submersible collection to feature a GMT function. The small sub second hand at the 9 o’clock position is styled with concentric circles and crosshairs to resemble a target which pays homage to this military inspiration.  The piece is powered by the  P.900 Automatic movement with 3 day power reserve.  The PAM1324 comes with a black rubber strap as well as a second which is a bi-material option with black and grey camouflage patter worn by Navy SEALs. 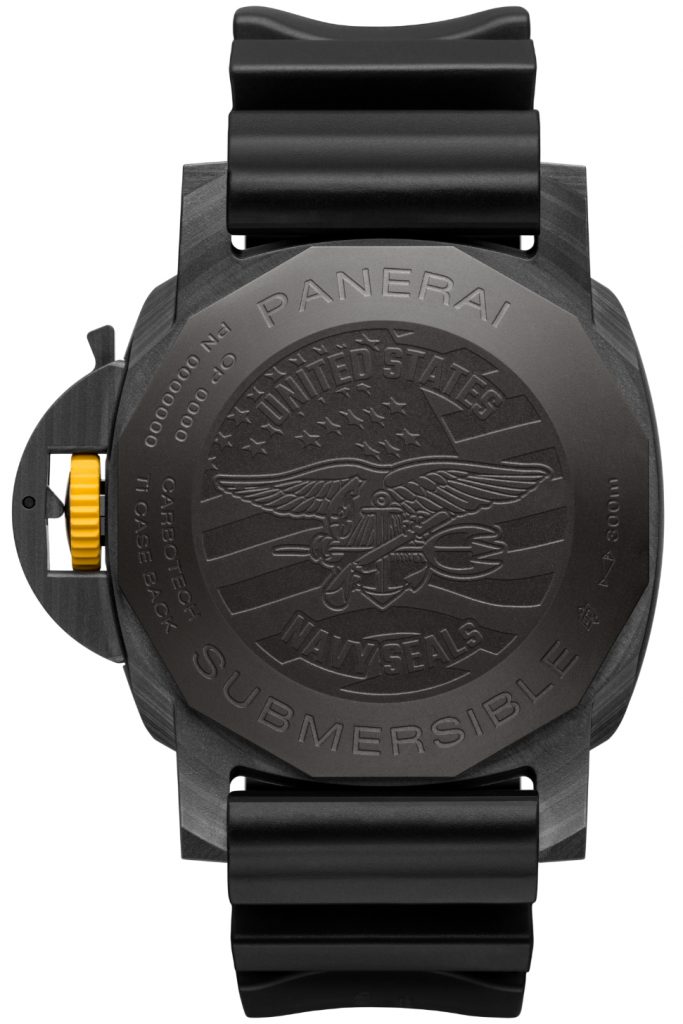 On the DLC coated titanium case back you will see an engraved Navy SEALs emblem which consists of an eagle clutching a flintlock-style pistol, a trident, and an anchor. This image appears across the stars and stripes of the American Flag.

Next in the line of the Navy SEALs collection is the PAM1323 which is a 44mm Brushed Steel Submersible with a gradient Anthracite dial and the same golden yellow accents on the hands, date wheel, and sub second dial that resembles the cross hairs. Above the 6 o’clock index it bares the NAVY SEALS text. This piece is also powered by the P.900 Automatic 3 Day movement. 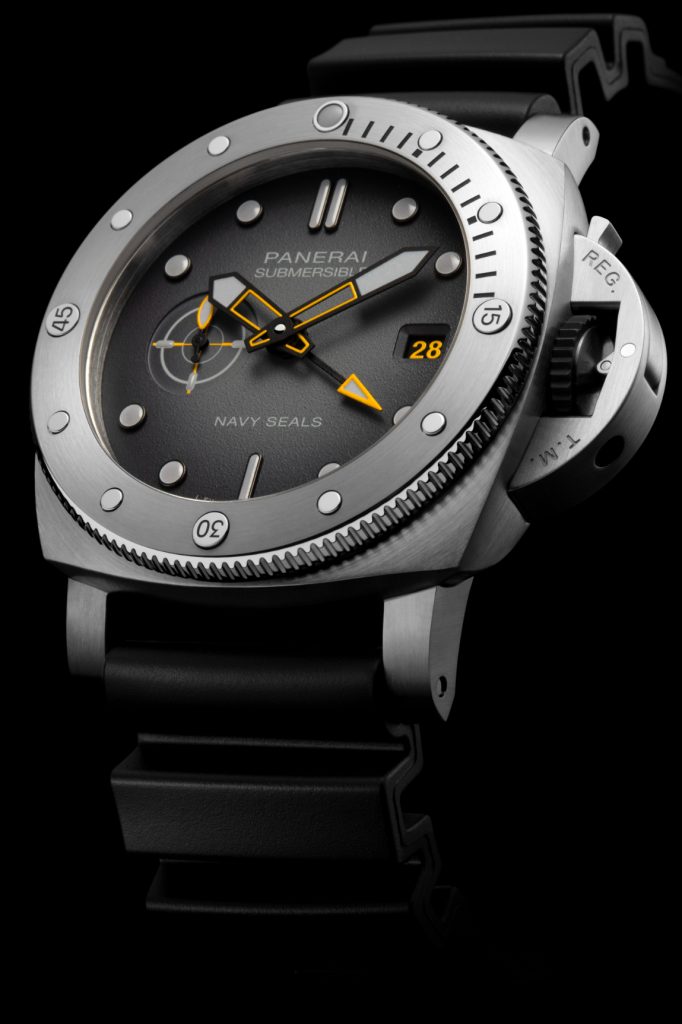 The back of this case is also engraved with the Navy SEALs emblem as with the other pieces in the collection. 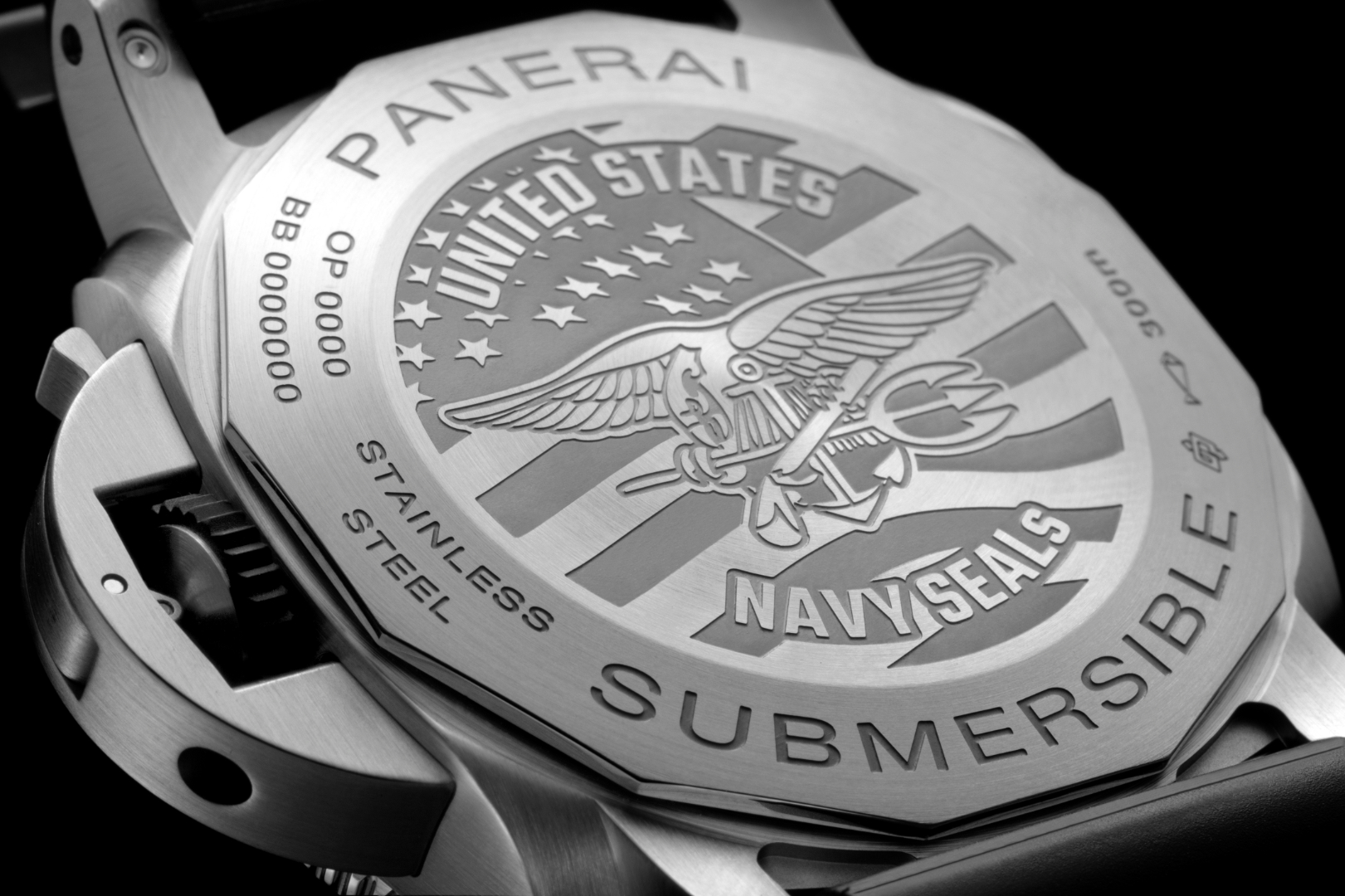 Finally we have the one that is the most striking in terms of looks which also is the Navy SEALs experience piece, the PAM1325. First let’s get to the breakdown of the watch.

This piece is housed in a 47mm steel case that is DLC coated to black and displays the same gray, black, and golden yellow palette as the other submersible watches in the collection. The dial features the raw forged carbon look with grey blocks of Super-Luminova to form the dots and indexes. To bring a beautiful contrast to the watch the rubberized crown, hands, bezel and Time to Target countdown include golden yellow accents. Finally on the bottom of the dial you notice the Navy SEALs emblem. 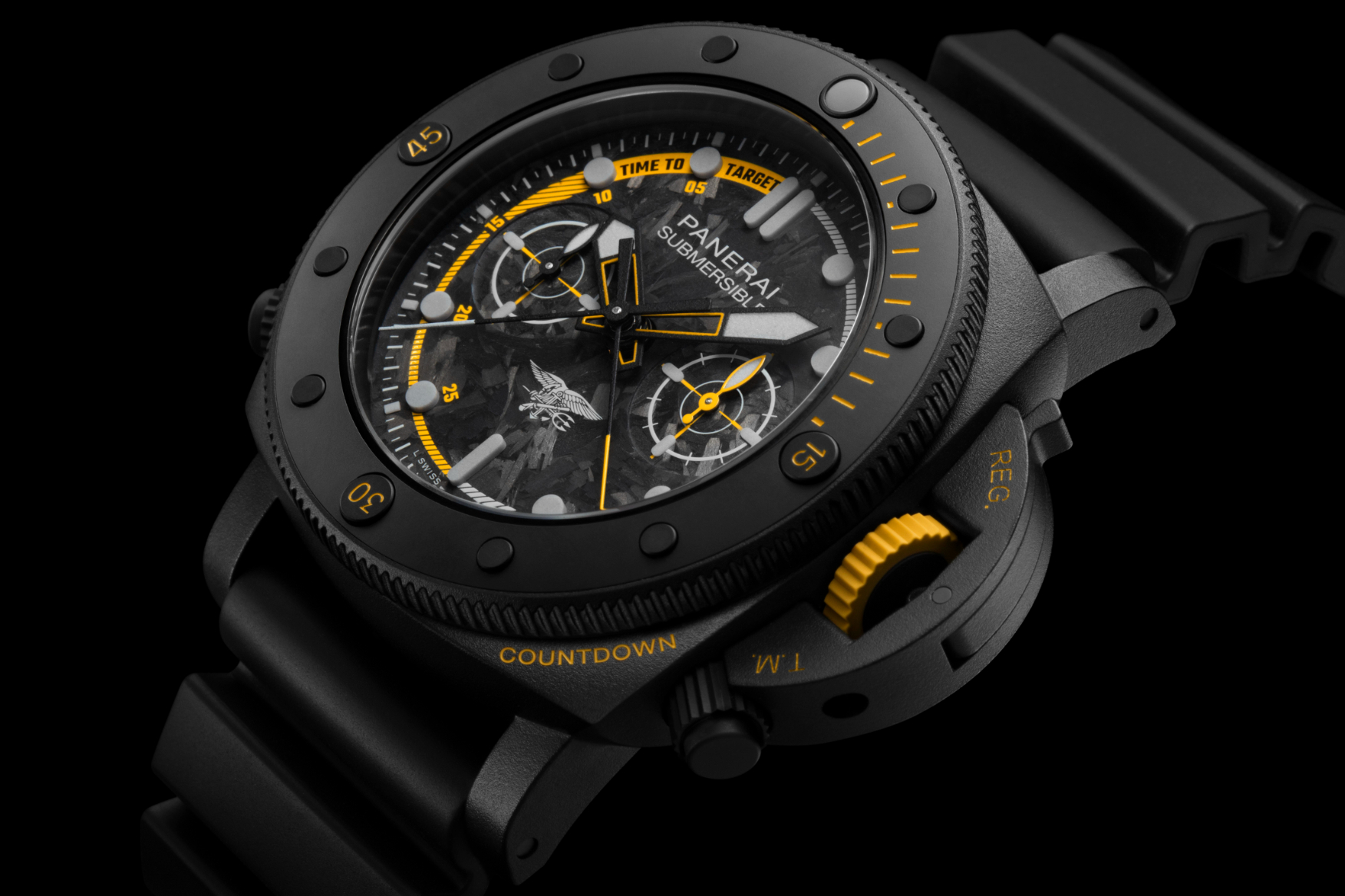 Powered by the P.9100/R automatic 3 day movement, the PAM1325  includes two sophisticated complications. The flyback chronograph which allows the reset and restart with one press of the pusher at the eight 0’clock and the Time to Target countdown, which indicates the time until a designated rendezvous. To operate this complication the wearer will repeatedly push the button at the 4 o’clock to set the center chronograph hand at the desired interval; pressing the chronograph stop/start button at 10 o’clock begins the countdown, indicating the time remaining until arrival at the target and once it is reached the time elapsed afterward.

Now let’s get to the next level experience that will accompany this piece.

This special edition Submersible is limited to only 20 pieces with each purchaser receiving access to an adventure that will immerse guest in the history of the Navy SEALs and grant rare, first hand exposure to the rigorous physical, emotional and mental demands of SEAL training. Every member of the mission will confront and transcend personal limits under the guidance of some of the world’s most tenacious warriors, along with a Panerai instrument created to withstand the most challenging environments imaginable. 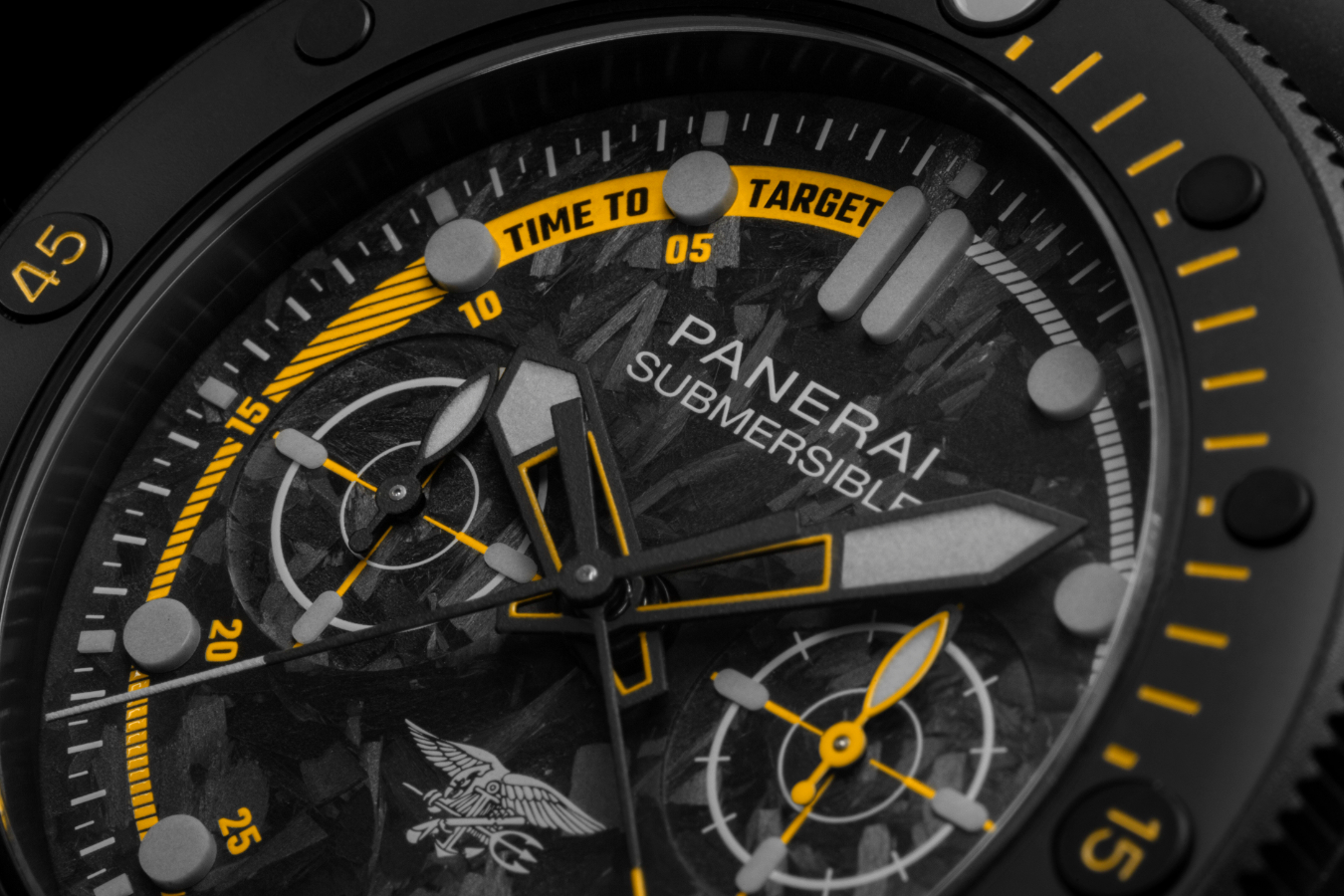 Along with the amazing experience, owning the watch will also give you access to a special NFT that was exclusively designed in collaboration with Skygolpe, who is a acclaimed multidisciplinary Italian artist and visionary in the digital sphere. Not only will the NFT look amazing, it will also unlock information tailored to each client’s excursion, benefits such as priority access to future initiatives, special services and event, and much more. Acquiring this piece and the NFT is just the beginning of the Panerai experience over time.