Russell Crowe Auctioning Off His PAM063 and PAM064

Divorce. It’s become so common these days that most people don’t even blink an eye when it happens. People do tend to take notice when it’s a celebrity that is involved in the divorce because the story usually gets juicer. My wife might enjoy the details of who did what while I tend to just ignore them all together. That of course changed when I found out that a recent divorce has prompted the selling of a watch collection which included a couple of older Panerai models.

The Panerai PAM63 and PAM64 that are up for auction are part of a much larger lot of items which over 200 pieces of memorabilia from many of his greatest films, art, and close to 30 other watches. Having been a fan of Mr. Crowe and his movies for a long time so I wouldn’t mind picking up a piece here or there but the budget doesn’t allow it so I will look from the sidelines on April 7th when the auction is set to start. 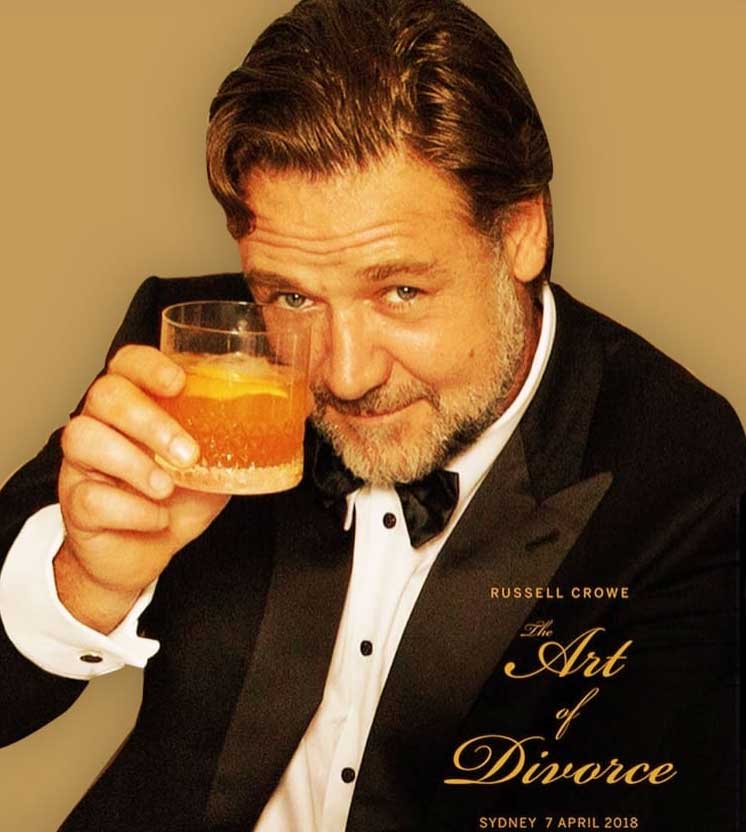 Of course as previously mentioned, the two Panerai that were part of the collection caught my eye and I thought it would be something interesting to share.

The first piece is the Panerai PAM064 which is Lot 198 in the auction. This piece is a 44mm Luminor Submersible unique edition of 500 piece from the year 2000. To the Panerai purists, the PAM64C is the original “La Bomba”. It was chunky and big and was everything that a diving watch that Panerai made needed to be. It featured a 1000 meter dive rating to go along with the rotating bezel to synchronize your dive time. The PAM64 is powered by the OPIII movement which uses the Valjoux 7750-P1 base with 21 jewels and 42 hour power reserve. The watch has the original tritium (T-Dial) black dial which shows a beautiful yellowing patina that you can only get with the tritium models as opposed to the newer super luminova.

According to Mr. Crowe, he purchased this watch while he was shooting the film Proof of Life(2000).

The PAM64C that is presented in this lot comes with what looks to be full box and papers as well as a signed letter from the Gladiator himself.  Taking a quick look at the pictures it looks like this piece has definitely been enjoyed given that the the watch could use a good cleaning. Or you can continue on with the dust and dirt that came along for the fide. I guess they were in a hurry and didn’t adjust the rotating bezel or screw in the top lug screw properly. It is also listed as being a 46mm diameter when in fact it’s a 44mm. 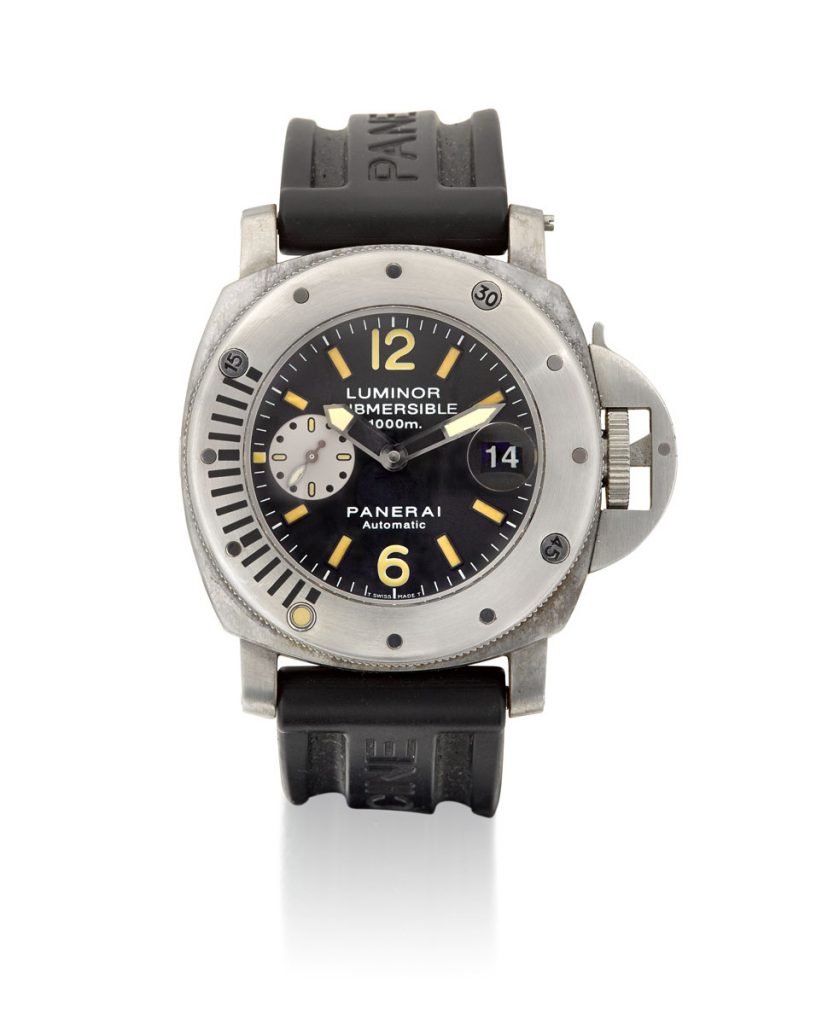 Lot199 features the second Panerai of the auction, the PAM063 Luminor Marina GMT from around 2001. This GMT being part of some of the early collections, features a full sweeping seconds hand which you don’t normally see with modern Panerai models. This 44mm black dialed beauty is powered by an ETA 2893/2 movement.

Crowe stated in the provenance, “‘I associate this watch with the film, Gladiator (2000). I bought it in Spain while there to do the premiere for Proof of Life (2000), however it was also the period of time when Gladiator was nominated for Academy Awards.”

As with the all the other items this item will come with a signed letter from Russell Crowe stating that he owned the watch. 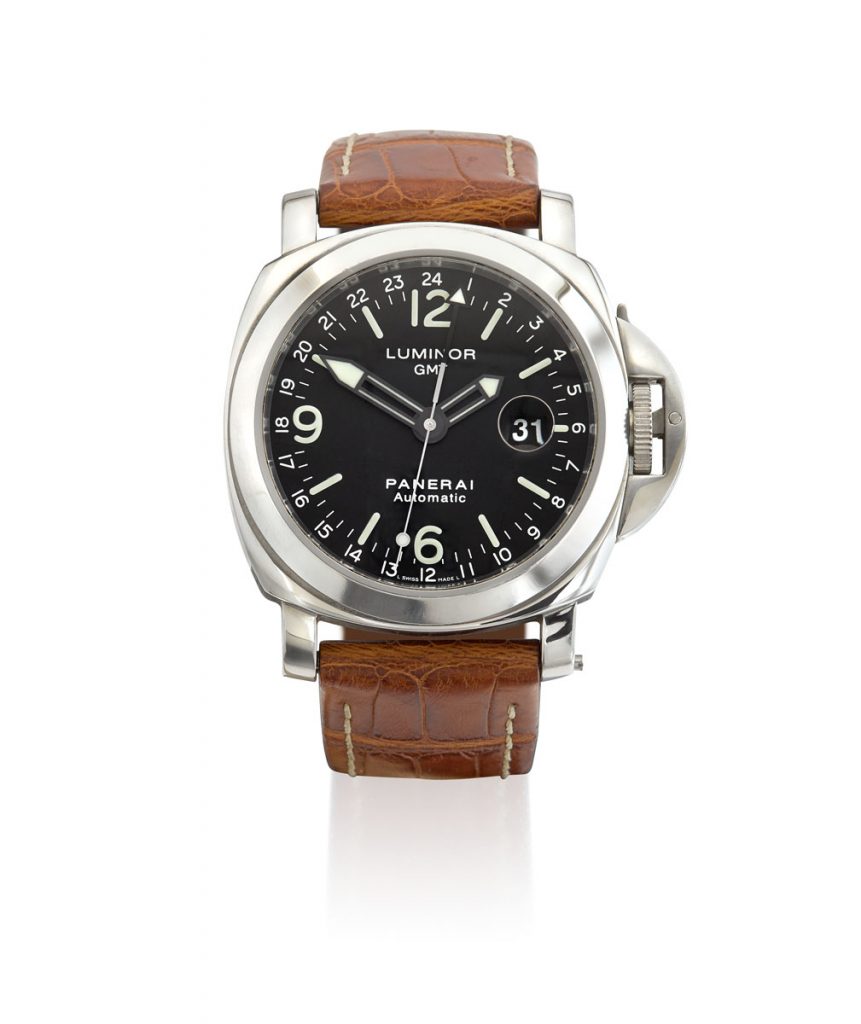 It will be very interesting to see what type of premium that these watches get since they are tied to the New Zealand native and mega star Russell Crowe. Currently both Panerai time pieces have an estimate of around $6,000 – $9,000 USD from Sotheby’s. You don’t see a PAM64C on the market and the only one I did see was retailing for $8,900 while the only PAM63 Luminor GMT was listed at $6,200 USD.

Both pieces are great pieces in my opinion and if you have been in the market for either of these pieces then why not get a full complete set that has a pretty amazing provenance to it. How many other people will be able to say that their Panerai was owned and worn by Maximus himself.

You can see the complete Russell Crowe: Art of Divorce lot on the Sotheby’s Australia website.  If you are Sydney and want to take a look at the exhibition it will be running from April 4-6. The auction is set for 6PM AEST on April 7th 2018.