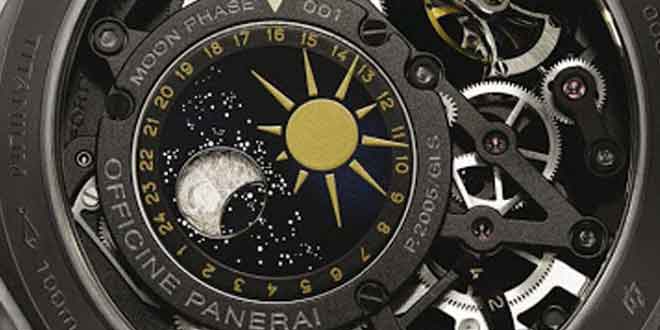 Panerai Takes You To The Moon With The PAM920

At SIHH2010 Panerai released the PAM365 Luminor Equation of Time Tourbillon which was one of the highest complication pieces in their collection. With that as the core, in 2018 Panerai releases the PAM920 Luminor 1950 L’Astronomo which takes over the reigns as the most complicated while introducing a few new wrinkles that push this new version over the top.

The PAM920 comes standard in a 50mm Titanium 1950’s Luminor case but because this is a made to order piece it can be made with either red gold or white gold as well. Of course the upgrade in case material will also include an upgrade in price. The newer version of the L’Astronomo features a new skeletonized dial as compared to a normal dial that was in the older PAM365. 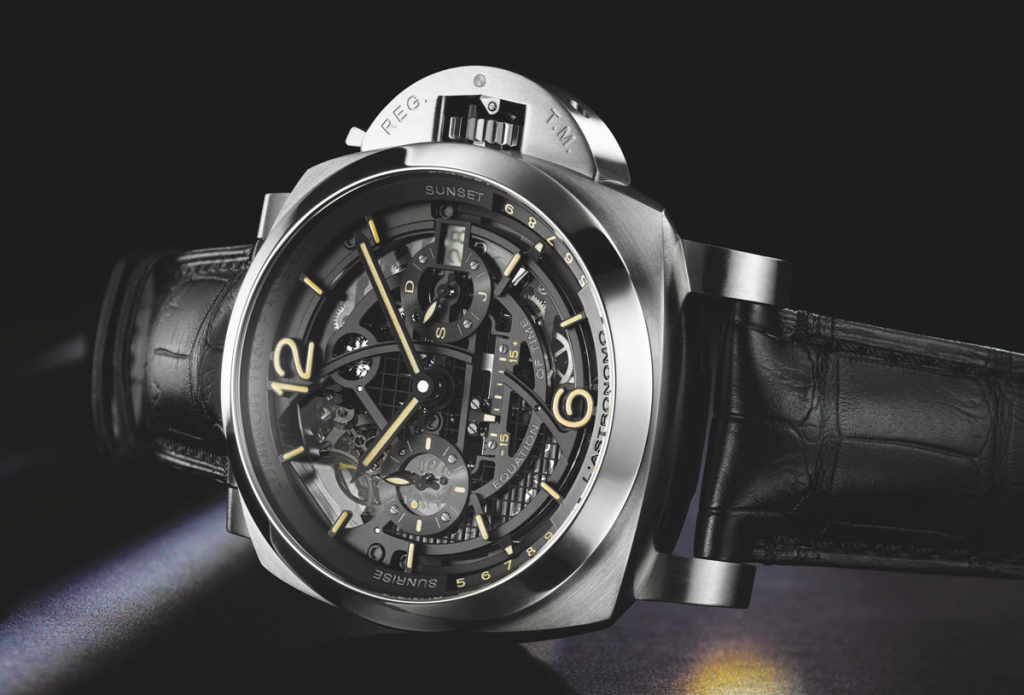 Moving on to the list of complications that can be seen from the dial, you will notice a plethora of them which are tied directly to the findings of Galileo over 400 plus years ago. It’s only fitting considering that the original time piece in 2010 was made marking the 400 year anniversary of the celestial observations made by Galileo as a result of the invention of the telescope.

Of course the PAM920 tells time with great accuracy thanks to it’s in-house tourbillon movement, but it also has GMT functionality, sub seconds dial, am/pm indicator, month, as well as date. Moving on, we have one of the more complicated functions which is the equation of time linear indicator above the 6 on the dial. If you have not read up on the equation of time, it measures difference between the solar and official local time. Since the world works on a standard 24 hour day but the world revolves around the sun in an ellipse rather than a circle, the time is not exactly the same at all times of the year. The difference between these two times is what is known as the equation of time and is only 0 four times a year. The rest of the time it can be as much as 16 minutes behind or over by 14 minutes which is displayed on the linear dial as -15 and +15. 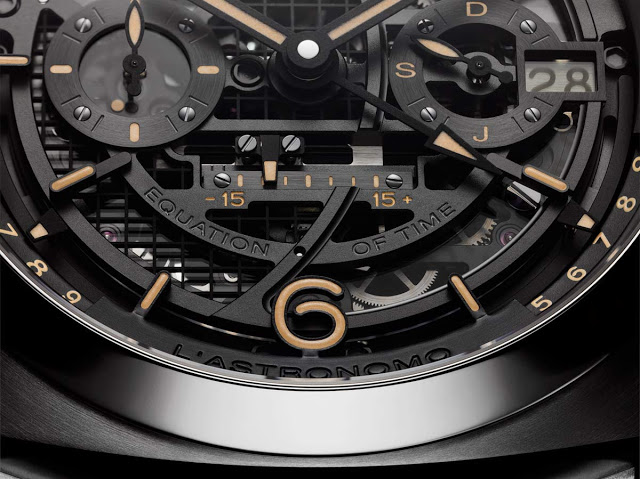 Next we have the Sunrise and Sunset complication which can be seen on the left and right side of the inner bezel. Both of the dials give you information of when the sun will rise and set according to the date. 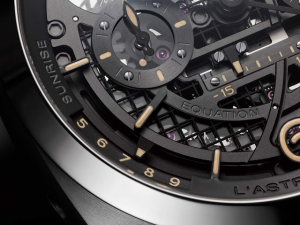 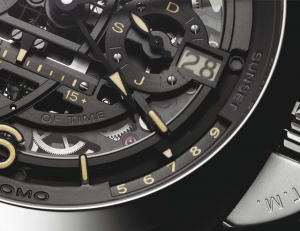 When you flip the watch on the back that is where you will find the newest complication to the Panerai family. The star map that was on the previous L’Astronomo has been replaced with a moon phase complication. The two discs that make up the moon phase indicator features a top disk that has a day and night indicator which displays the 24 hours of the day and a sun and moon to mark AM and PM. At the center of the star side on the disk is an opening through which you can see the detailed lower disc. On this lower disk is a moon, which by each day has a shape that evolves based on the exact duration of one lunar cycle (an average of 29 days, 12 hours, 44 minutes and 3 seconds). 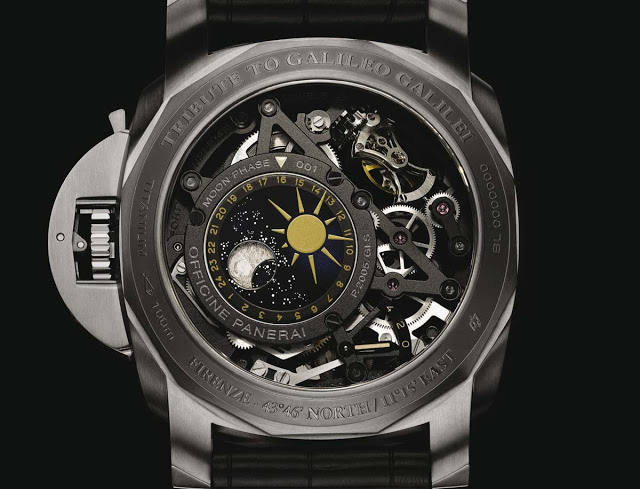 As with the previous model the watch owner will be able to select a specific coordinate or hometown which the movement of the watch will be set to. This setting will always remain the same and display the moon phases according to that home city since it always relates to the sky above the place and takes into account the difference between the earth’s northern and southern hemispheres. Like the moon phase, the sunrise and sunset indicators are tied to that home city as well. 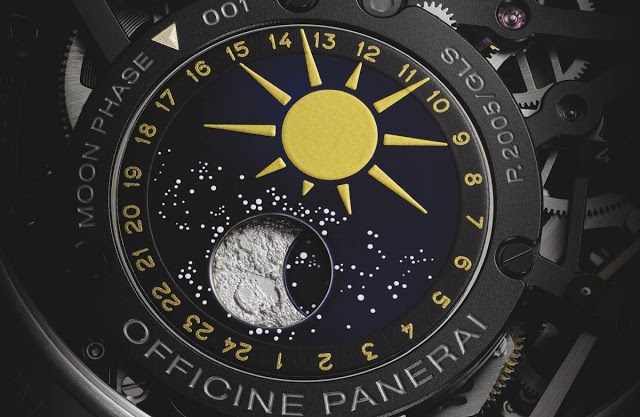 The next advancement that I actually think is one of the most interesting on the PAM920 is the way the date is displayed. When you first look at the window you almost want to think that the date is a digital display which would be totally out of place on this masterpiece. Because the watch is skeletonized a typical date wheel would really throw off the aesthetics of the watch as well as cover many of the beautiful components that make up the P.2005/GLS movement. To combat this the Manufacture in Neuchâtel designed an innovative system which is patent pending. 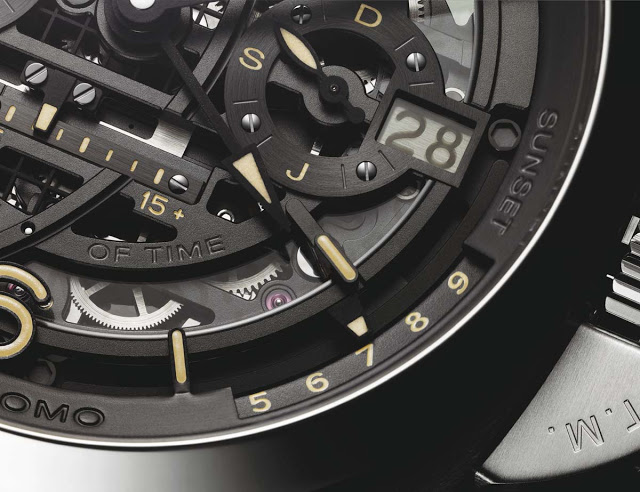 The date disc in this system is made of a borosilicate glass and the numbers have laser-modified optical properties. The numbers are virtually invisible when you look at the disk in pictures or in person at all positions except for the one that is aligned with the little date window. When the disc comes into the date window a polarized crystal which is situated above the date disc causes the number to appear perfectly legible. This feature is innovative and to see in the flesh, I have to say beats the moon phase in terms of cool factor for me.

All of these amazing complications housed in the PAM920 is powered by a modified version of their P.2005 movement. In this setup it is known as the P.2005/GLS (standing for Galileo Luna Scheletrato), which as mentioned before is personalized to operate in accordance with the geographical coordinates of a place chosen by the client. It features a patented tourbillon regulator which rotates once every 30 seconds which you can see by the small dot that rotates on the small seconds sub dial. Thanks to the two spring barrels, you have enough power to last you 4 days and are both visible from the front and back as well as the power reserve indicator on the back. 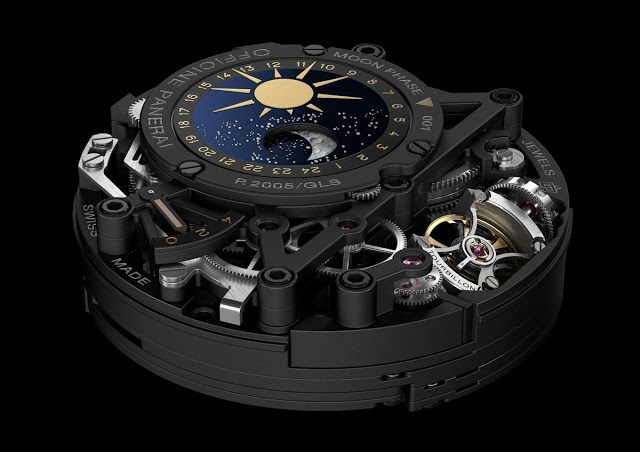 As mentioned earlier, the PAM920 is an exclusive made to order piece and can be almost fully customized. You have the ability to select the case material and finish, the color of the hands, the Super LumiNova type, as well as the strap.

As technologically advanced and complicated the Panerai PAM920 is I do have some minor qualms with it. Having the moon phase is a very nice complication that they have implemented into this movement but I think it would have been much better if they could have found a way to implement this onto the front of the watch instead of the back. How often do we think we will take off the watch to look at the moon phase function?

While I agree even if the moon phase was on the front it wouldn’t be something you use on the day to day, it would have been a pretty sexy addition to the skeletonized dial. I’m not a master watch maker but I am fairly certain they would have had to create a completely new movement to be able to do that so this was probably the quickest road to adding the moon phase complication to a watch since they essentially replaced the star map that was on the back of the PAM365. 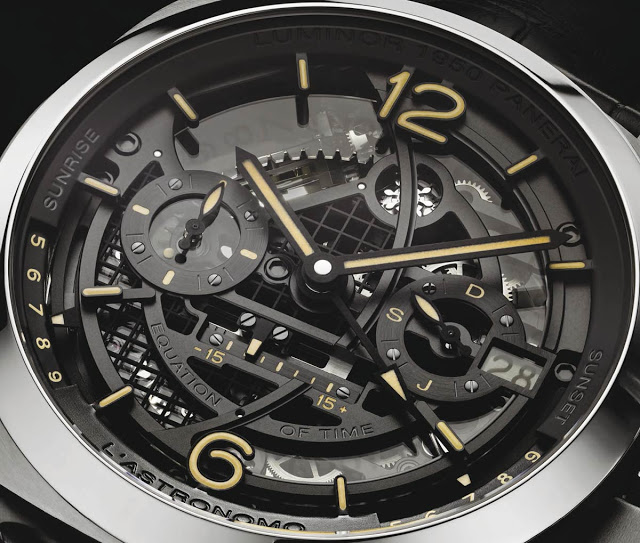 Granted we didn’t see many Haute Horologie pieces in Panerai’s 2018 release, I think that was a wise move becuase the ones they did decide to bring to the table really showcase their expansion in the industry as well as trying to show how they have slowly evolved to bring even more complications to market. Initial numbers I was hearing for the PAM920 put it at around $200,ooo USD for the Titanium Version. 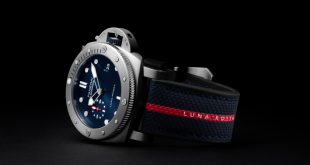