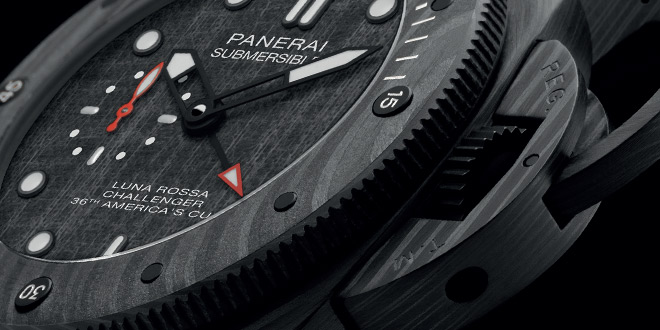 At SIHH2017 Officine Panerai announced their partnership with the America’s Cup released a number of watches sponsoring Team Oracle from the United States as well as Team Softbank from Japan.  As a continued theme to the association of Panerai with the Sea with it’s innovation and beauty, Panerai CEO Jean-Marc Pontroué and Patrizio Bertelli, President of Luna Rossa and CEO of the Prada Group together with Pirelli provides that Panerai will be the Official sponsor of Luna Rossa. Panerai will be creating a series of watches directly inspired by the technologies and materials used in the America’s cup. This competition is the oldest sports competition in the modern world and also one of the most advanced being driven by constant research and innovation.

The first watch that will be part of the series and worn by members of the Luna Rossa Sailing team headed by Massimiliano “Max” Sirena – who has already won the America’s Cup twice – will be the PAM0139 Carbotech Submersible Luna Rossa Challenger.

The PAM01039 is a 47mm Luminor Submersible with a case made of the highly advanced material, Carbotech. This lightweight carbon fiber material is also used to make the AC75 Monohull, which is a picture that is engraved into the titanium case back on the Luna Rossa Challenger alongside the profile of the majestic yacht. 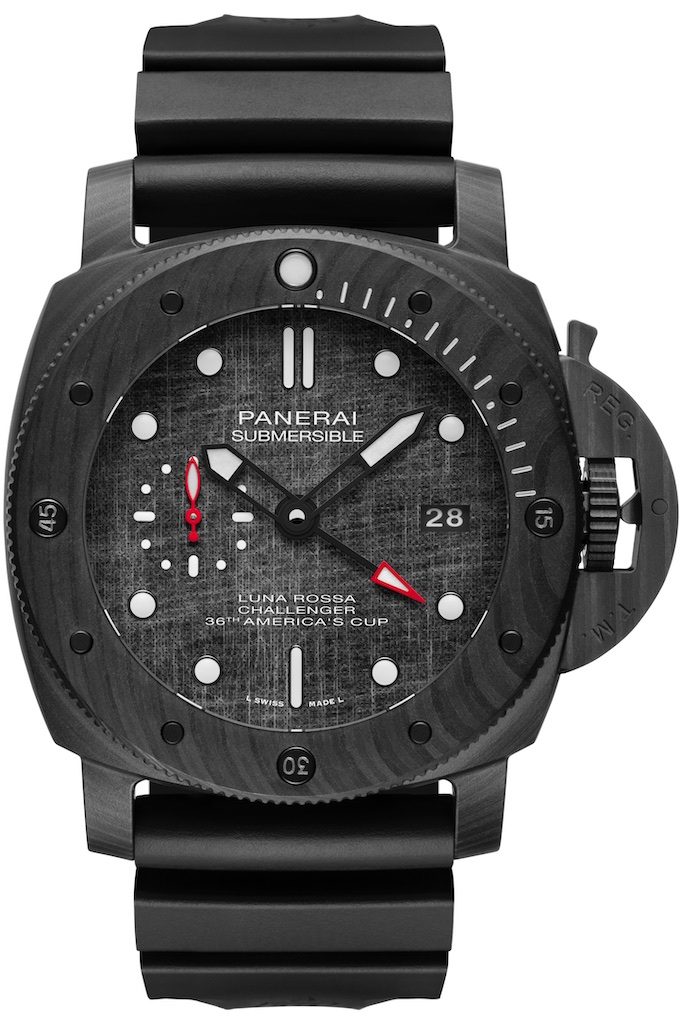 Continuing the marriage of the Luna Rossa and Panerai, the dial of the PAM1039 features pieces of the actual sails from the Luna Rossa attached to it. You can easily see the texture and weave pattern of the state of the art sales which mirror the innovation that Panerai brings to the market. The indexes are done in white so they are legible even in the deepest of waters or darkest of nights. The sub second hand at the 9 o’clock position as well as the GMT hand are done in a red accent color which contrasts nicely with the deep black matte finish of the watch. At the top of the dial you see the words “Panerai Submersible” and at the bottom you have 3 lines of text which reads “Luna Rossa, Challenger, and 36th America’s Cup. 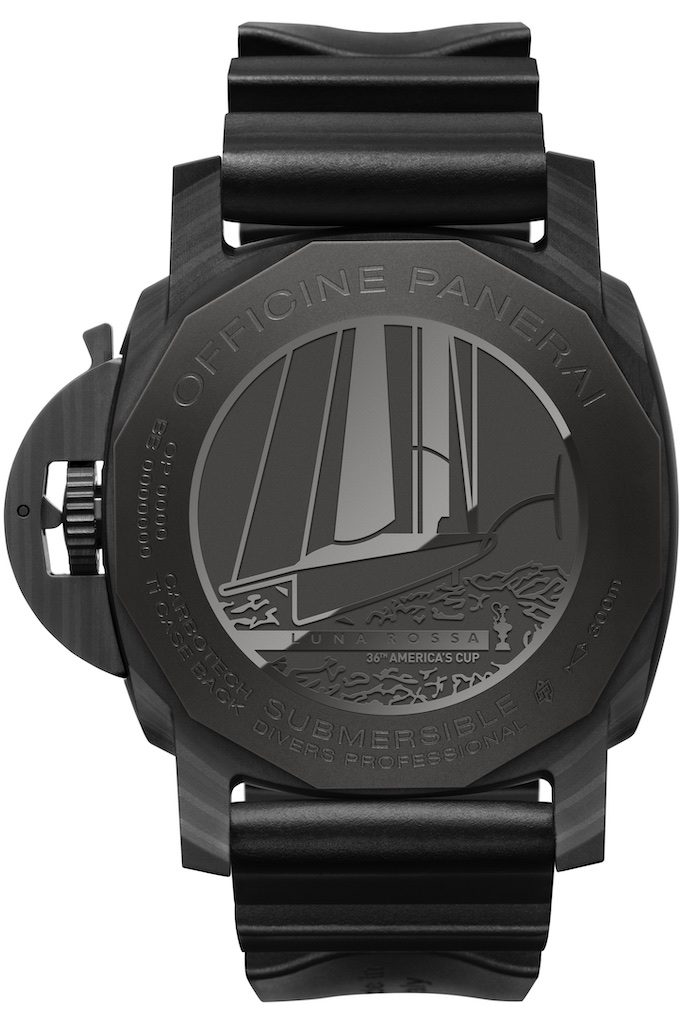 Behind the beauty of the Luna Rossa Challenger, the completely in-house P.9010/GMT automatic movement features a bidirectional oscillating weight and two spring barrels giving it a 3 day power reserve. As with any standard submersible the solid case back which is made out of titanium allow it to have a depth rating of approximately 300M.  The watch is finish offed with the black rubber waterproof strap and titanium trapezoidal buckle that is perfect for diving or any sport function.

This watch along with the other releases from Panerai at this years SIHH show a commitment to the Carbotech material and expanding the amount of pieces that use this recolutionary material. Since it’s debut in 2015 the PAM616 has been a very big hit amongst the community and I am sure the rest of these pieces released this year will be as well. I would really like to see more 44mm Luminor 1950’s or even Luminor cases using this material as opposed to mainly submersibles.

This first watch as part of the partnership with the Italian yacht will definitely set the stage for the pieces to come after it. In the words of Jean-Marc Pontroué, CEO of Panerai, “Technical innovation, Italian Excellence, love of the sea and boldness”, The partnership between Panerai and Luna Rossa expresses all the values with which our brand is so strongly linked, the same values which we want to convey to our enthusiastic clients as they are stirred by the emotions which Luna Rossa will arouse”.