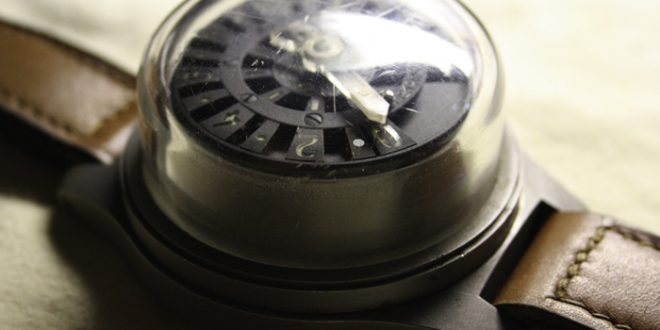 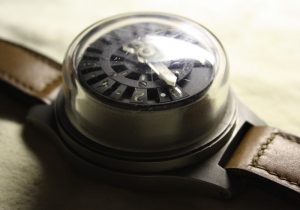 It goes without saying, that Panerai’s are true “tool watches”. As the now commonly known story goes, their earliest timepieces, containing Rolex-made movements, were originally produced for divers and frogmen of the Italian Navy. In recent years, we’ve seen vintage references like the 6152/1 and 6154 command astonishing prices at auction, which has subsequently caused a shift in focus, away from what are arguably some of the most interesting pieces produced by the Florentine watchmaker. What I speak of, are Panerai’s wrist-worn diving instruments, produced throughout the 1940’s, up until the mid 1980’s. Be it a compass or a depth-gauge, there’s no denying that these incredible tools certainly make up a significant part of Officine Panerai’s history, that truly ought to get more recognition.

Now, as far as vintage Panerai depth gauges go, this example clearly features some unique design aspects. It’s dial bears a
level of complexity that you just don’t see on most of their earlier pieces, as displayed by the symmetrical cutouts of unused dial space, alongside the now iconic numbering, and luminous text that reads “Luminor Panerai”. As with any other PAM, size is no issue, in that this 16-meter depth gauge’s case measures a whopping 70mm wide, 90mm tall, and
43mm thick! Additionally, it’s worth noting that even after decades upon decades of dormancy, this specific example still functions quite accurately. 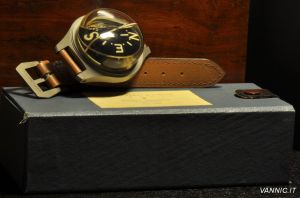 Panerai designs, are their vintage wrist-mounted liquid compasses. Like the modern PAM’s of today, these tools featured navigational directions in a bold, no-nonsense, luminous text, such that they could be easily read by divers in the Italian Navy. These are widely considered to be the most prized of the vintage Panerai wrist instruments, so much so that just over 10 years ago, the brand released the Black Seal Compass, a slightly modernized version of the 70mm purpose-built tool.

At this point, what most Paneristi are probably wondering, is whether or not these great tools will fit their endless number of straps, and luckily the answer is yes! But with all jokes aside, it’s important that we recognize and acknowledge these instruments, as they make up a significant part of Panerai’s history, and often trump the intricacy of the brand’s vintage diver’s wristwatches. So the next time you go to strap on a PAM 193 Depth Gauge, or a compass bezel-bearing Luminor Arktos, know that not only are you wearing a great, rugged and modern tool watch, but a subtle commemoration of Officine Panerai’s storied, small beginnings.